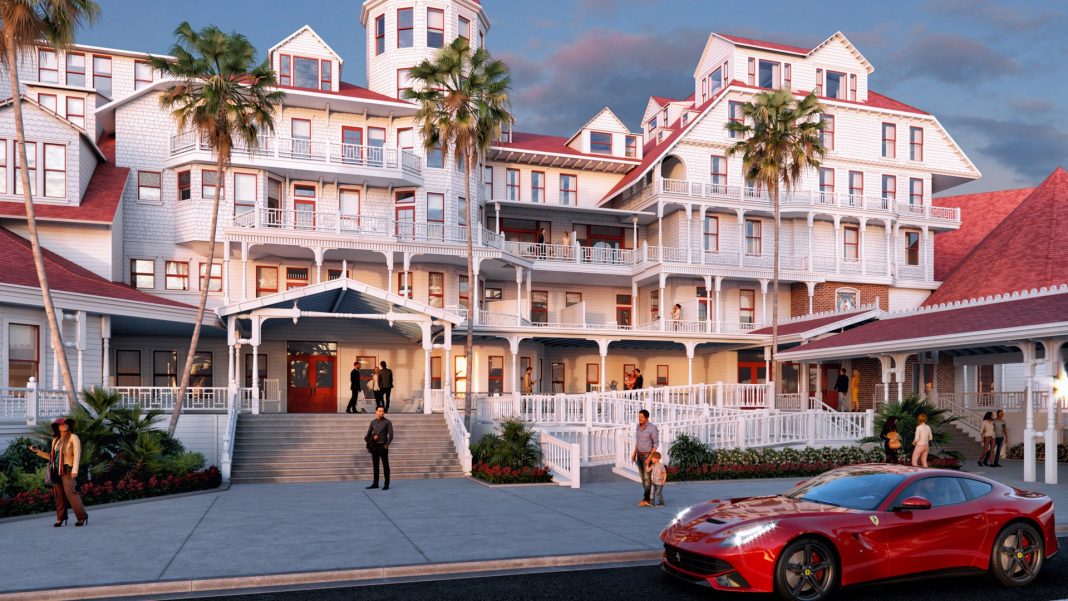 After looking back on The Del’s legendary past, we now focus on the bright future it is heading towards. This current year, 2020, brings some major changes and upgrades to The Del. Several areas like the entrance, Sun Deck, Babcock & Story Bar, Babcock & Story Emporium, ENO Pizzeria and The Cabanas have either been temporarily relocated or closed to accommodate the construction process. When the Sun Deck restaurant reopens in time for the summer season, it will have a full kitchen with a 450-500 seat restaurant offering lunch and dinner. It will be more connected with the pool area as a rooftop lounge with live music offered around the pool. In the interim, “On the Rocks” food truck offers toes in the sand dining with delicious salads and loaded fries, as well as a host of amazing libations.

A smaller version of the Babcock & Story Bar has been temporarily relocated inside Sheerwater restaurant. When it reopens in its previous location, it will prominently feature the cupola part of the original wooden bar which served as the cashier station. This piece of history was previously thought to be lost but has been located and missing woodwork will be milled to complete the look. ENO Market & Pizzeria will also be opening this summer with a menu focused around grab-and-go options for healthy breakfast, lunch and dinner, including wood-fired pizza and salads that can be enjoyed on the outdoor patio.

The Cabanas, which are the premier guest rooms located around the pool area, are undergoing major renovations of $130,000 per room with a complete redesign showcasing a coastal contemporary feel complete with expansive outdoor terraces including fire pits.

The retail area will see a major update this year in two phases with the first underway and ready by June 2020 and the second phase completed by late 2020. One of the favorite shops, Babcock & Story Emporium, which is currently closed, will come back downstairs near the other shops this summer.

More renovations have just started on updating the spa and wellness center. A temporary spa location in the northeast corner of the Garden Patio area will provide spa services in the interim. The Fitness Center is scheduled to undergo changes from September through December 2020. Meeting rooms are also scheduled for enhancements. The new stop light at Avenue del Sol recently received Caltrans approval after a two-year process, which will pave the way for the new entrance leading up to the dramatic front porch entrance.

General Manager Harold Rapoza points out “By the end of 2021, all 28 acres will receive upgrades, both inside and out, at a price tag of well over $400 million.” So, in the final year of renovations, The Views, formerly known as Ocean Towers, will be enhanced with major interior and exterior upgrades including glass balcony railings and terrace rooms. A new 15,000 square foot event center that opens up to a great lawn for a truly indoor/outdoor concept will be equipped with a banquet kitchen, to offer the largest event space on the property.

The new resort villas on the south side of the property “will be a resort within a resort complete with a dedicated check in and lobby living room,” says Rapoza. Guests and owners will enjoy an ocean view pool with cabanas and fire features, along with an open-air pool bar, as well as many other amenities. Similar to Beach Village, these new villas will be offered as whole-ownership, limited term use condominiums, with owner use limitations imposed by the California Coastal Commission.

The most dramatic change of all will be the new main entry debuting by late 2021. To recreate elements of the original front porch, with its wide veranda and two sets of entry stairs, 2,000 square feet of interior space added on over the years will be removed. The original stained glass window will be moved, restored, and reinstalled at its original location on the second floor, and 17 smaller stained glass windows that originally existed will be re-created. Leading up to this majestic veranda will be a new brick-lined main entry. Along with the new entry comes improved pedestrian access to the bay, Avenida del Sol street improvements and improved beach access for the area between The Del and The Shores with an ADA ramp.

Guests driving up to the new entrance will see the restored Industrial Buildings, which were previously more back of house. This includes the 1887 Oxford building, formerly the female employee dorm, which will continue to be administrative space. The 1919 Laundry which was slated for demolition but kept in place, complete with original conveyance equipment, to help preserve The Del’s history. The 1887 Power Plant which originally provided power for the entire island until SDG&E came on the scene in 1922. During restoration, an interior fireplace was uncovered, and the upper level mezzanine will be used for small meeting spaces. The Ice House, built in 1889 then re-purposed in 1901, will now become a museum showcasing The Del’s history.

Members of the audience at the recent Library presentation were able to ask questions and one resident pointed out that he hosted his wedding reception at The Del in 1969 and booked the honeymoon suite for $25, which included a free bottle of wine. He was elated when he and his bride were upgraded to the presidential suite. When attendees asked about The Del’s room rates, Rapoza said that the average room rate was $450, but varied from $300 to $700, depending on the room and season. He indicated that after the renovation, a three to five percent price increase is initially anticipated. Guests also asked about local discounts and the hotel is currently offering a 15 percent locals discount at the downstairs shops, excluding Brady’s, Eclipse Eyewear and the lobby shops, until the end of March. A new pop up store, Bags & Baubles, is located in the old Blue Octopus location offering jewels by La Vie Parisienne (French style jewelry), handbags from Sol and Selene, and fragrances from Tokyo Milk. Over the next six months, other pop ups will emerge so check back frequently. Guests can also enjoy special low room rates, from $198, on select dates until Memorial Day weekend using promo code P7.

Rapoza also responded to questions about the number of employees and how parking issues would be addressed. He pointed out that The Del currently has 1200 employees with a surge to 1350 employees in the summer. The master plan additions will likely increase those numbers by 200 to 300 people, and he said that steps were being taking to ease parking by offering employee bus passes and encouraging ride sharing. “The new master plan provides for 900 guest rooms and 1179 parking spaces,” he commented. For additional details, check out the masterplan2022.hoteldel.com.