Like other decorating trends, wallpaper has seen its star rise and fall. It’s now shining bright once more as homeowners turn to it for accents and textures.

Wallpaper made its debut centuries ago as a less costly alternative to tapestries used by affluent homeowners for decorating. In stark contrast, wallpaper today represents a luxury decorating tool. While the medium continues to cycle in and out of style, the pendulum has now swung in favor of wallpaper as more homeowners are eager for hues and patterns beyond the white, beige, and gray neutrals that have recently dominated interior palettes, says Chicago-based designer Tom Segal, principal of Kaufman Segal Design. 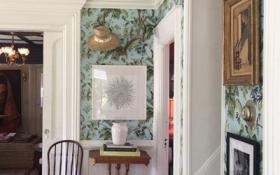 But these aren’t the dainty floral or striped patterns of the past. Manufacturers such as Brooklyn, N.Y.–based Flavor Paper have introduced modern, sometimes funky patterns that include Andy Warhol floral prints and nature motifs. “[Wallpaper] lets my client start and end the day in a joyful way,” says interior designer Phillip Thomas. One of the reasons for the uptick in interest, he says, is because so many artisans now design papers that resemble exquisite works of art. “It gives homeowners an opportunity to create interest in certain rooms and differentiate spaces.” 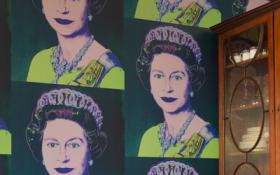 Lexington Homes, a developer of townhomes and single-family homes in Chicago, uses wallpaper to woo buyers to its upscale townhome communities. “We have never worried about turning off buyers with wallpaper,” says principal Jeff Benach. But as Chicago designer Jessica Lagrange points out, wallpaper is an expensive, highly individual decorative treatment. There’s a chance that the choice may not be a good fit for every buyer. If a resale is in a homeowner’s immediate future, they should have a game plan for its potential removal, she says. 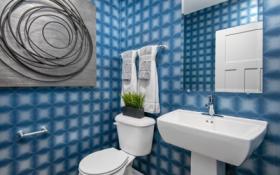 To help buyers or sellers who are curious about using wallpaper to complement an interior without making it look dated, here are some tips on products, trends, and techniques from design experts.

Most design professionals agree that wallpaper can be an exciting alternative to spice up a few rooms—in moderation. “Too much wallpaper makes a house dizzying just as painting each room a very different, dramatic hue can,” Segal says. Most often, wallpaper is used best in entryways, powder rooms, dining rooms, and master bedrooms, says Rebecca Pogonitz of GOGO Design Group outside Chicago.

New York–based designer Jody Sokol prefers to limit paper to two rooms on the main floor of a two-story home. In a one-story house or apartment, she thinks it fine to paper a few more areas as long as adjoining rooms flow together with the same paint color, eliminating choppiness. 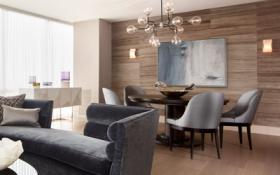 Because of its typically small square footage, the powder room is hands down the most popular room to paper, Segal says. For dining rooms, he suggests going with a dressy paper to make it look special. Choose a calming pattern and color for a master bedroom, where the goal is to unwind and sleep. Los Angeles–based designer John McClain says the decision to use it in any space depends on both the room and pattern. “You love a jungle print but you may not want to lie in your bed and stare at it,” he says.

The room where wallpaper seems least desirable is the kitchen, particularly when it’s filled with attractive cabinetry, appliances, and tile. It’s also used less in bathrooms due to potential damage from steam and water, though certain vinyl and commercial papers may hold up.

While it’s still common for designers and homeowners to apply wallpaper on all four walls of a room, using it on a single accent wall is a growing trend. This is commonly seen behind a bed, atop a ceiling, or around a fireplace to create drama, Pogonitz says.

Kristin Barnett, a Nashville-based designer, stager, and color expert known as “the Decorologist,” also applies wallpaper to the back of bookcases. But she avoids using it below chair rails or as a room border, which she says dates the look.

Thomas suggests giving wallpaper a new twist by using it in ways it wasn’t necessarily intended. “I like to think outside the box and install a stripe vertically or horizontally, cut it into squares or triangles, create unique patterns, or use it on furniture,” he says. 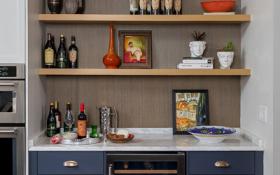 Many removable peel-and-stick wallpapers are now available in more patterns and colors and often at a lower price than traditional papers. They can work well for those who are DIY enthusiasts but don’t plan on staying in their homes or apartments over the long term.

No single color seems to have taken hold, according to Segal, but there is a growing preference for a rainbow of saturated hues rather than pale neutrals. Pogonitz agrees but stresses limiting bold color choices to a single room or two. Though they may be losing favorite now, neutrals still have their place, especially when patterns are small or paired with a texture, Segal says. And when the exact desired color can’t be found, many manufacturers will make custom color papers. 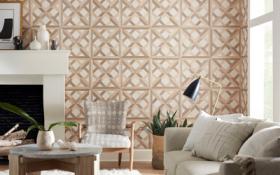 Oversized, bold geometrics and florals remain among the most popular newcomers overshadowing diminutive, sweet prints. Yet, a bold look requires some discretion. Barnett warns against using such patterns behind a television or on a wall that homeowners spend a lot of time facing directly. 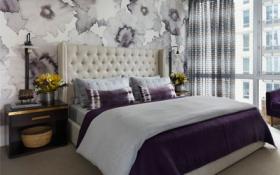 Another popular trend is the use of natural motifs and landscape murals, especially in dining rooms. In a similar vein, digital printing of supersized images and simulations of natural materials—from wood grains to striated stones—has gained traction, says Angel Georgiou, senior marketing specialist for imaging supplies with Canon Solutions America in the Chicago area. “Home owners now can buy standard images off the shelf or turn their own high-quality photos into wall coverings,” says Georgiou, whose company manufactures equipment and distributes wide-format graphic printing supplies. “It makes it easier for consumers to order online and install products themselves without wallpaper paste. Then, later, they can more easily take them down.”

McClain loves it when someone wants to walk up and touch walls he’s designed. Papers today are made with a variety of textures, such as grass cloth, leather, vinyl, silk, linen, suede, and even mother of pearl, creating excitement and countering the flatness of most paint finishes. Some textures are woven onto metallic paper so there’s a glint of sheen in the background. 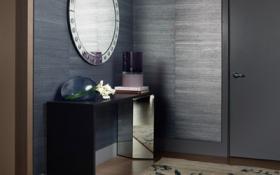