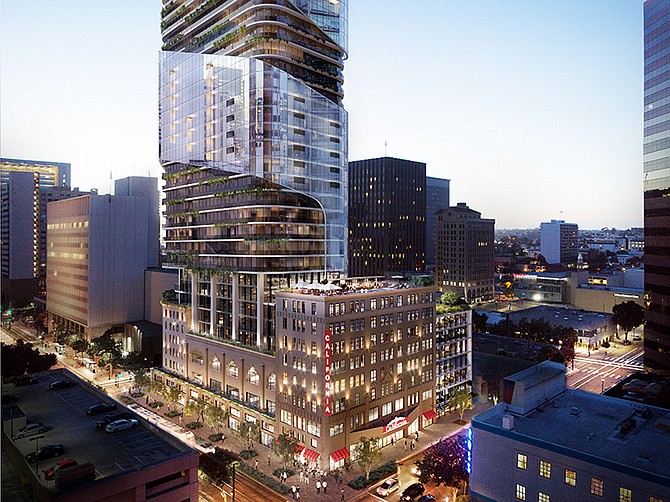 Theater’s Star Qualities to Be Part of Condo Tower

With its glory days as one of downtown San Diego’s premier entertainment spots well behind it, the once glittering California Theatre will sparkle again as a glass and steel showcase condominium tower rising 41 stories.

The aging and vacant theater at the corner of Fourth Avenue and C Street at 1122 Fourth Ave. was too far gone to preserve.

But the project that will replace it will re-create much of the old theater, including its ornate façade and marque sign.

“We’ll re-create the theater façade with a modern glass building rising above it,” said Emma Alexander, director of sales and marketing for Caydon, a developer based in Australia. “Old meets new.”

Caydon bought the theater in 2019 from Presidio Bay Ventures and Sloan Capital Partners.

The company declined to disclose the purchase price, but CoStar, a real estate research firm, listed the price as $21.1 million.

Alexander wouldn’t say what the units would cost, beyond saying they will be “an attainable price point.”

“San Diego is experiencing a boom in young professional population growth. With our project, we will be targeting this market primarily with our attainable price point, as well as downsizers and second homebuyers,” Alexander said. “We are focused on those wanting a convenient, cosmopolitan lifestyle rather than targeting a specific market.”

Aside from floor-to-ceiling glass in every unit, Alexander said she couldn’t give details on the interiors of the condominium units because the project was still being designed.

The tower also will have a dog park, gym, lap pool, sky deck and lounge above 7,445 square feet of retail space, although again, Alexander said she could not provide details.

The project is designed by Caydon Architecture & Design assisted by Carrier Johnson + Culture of San Diego.

Construction is slated to start later this year and finish in mid-2023.

The theater was the subject of a lawsuit filed by Save Our Heritage Organisation (SOHO) to stop demolition.

The lawsuit was settled, and SOHO Executive Director Bruce Coons said SOHO’s board of directors unanimously supported the project as revised by Caydon.

“It’s the best that could come out of the circumstances,” Coons said.

SOHO’s goal was “to preserve as much of the old theater as possible, the architecture in particular because we thought it was as good as any of the architecture in Balboa Park,” Coons said. “Caydon seems to be really conscientious in trying to do the best reconstruction that they can.”

Despite the imposing size of the condominium tower, Coons said it won’t overpower the restored portions of the theater.

“They’re kind of almost separate buildings from each other. It’s set back from the other facades. It’s kind of its own thing,” Coons said. “You have to look pretty high to see the new building.”

Opened in 1927 by West Coat Theatres as the New California Theatre, it had 2,200 seats and a nine-story office building.

In its time, the theater was considered a movie palace, said Elsa Sevilla, director of external affairs for the San Diego History Center in Balboa Park.

“It had silent movies, that’s how far back it goes, and it had an organ that went with the silent movies,” Sevilla said. “When it first opened, they had people like Constance Talmadge and Tony Moreno” starring in the 1927 silent film classic “Venice of Venus”.

Ceilings were gold leaf and murals were scattered throughout the interior and was dubbed “the cathedral of the motion picture,” according to the History Center.

Window to the Past

Along with the movies, the theater operated as a vaudeville stage until 1937.

“It’s a window to the past, it’s kind of like going through this (time) portal,” Sevilla said. “It’s such a beautiful building. They don’t make them like they used to. It’s extremely elegant. It’s in the Spanish colonial revival style.”

The theater stopped showing movies in 1976, Sevilla said, and closed for good in 1990.

It has languished ever since despite many efforts to resurrect it as the cornerstone of a redevelopment drive along C Street.

Caydon was drawn to San Diego because “it has a great feel to it,” Alexander said. “It is walkable and you get to the water and airport in a matter of minutes. We saw a high demand in the market with San Diego’s population growing rapidly and the lack of attainable product in the market.”

The company was attracted to the theater site in particular because “it has character and history that you can’t create with new buildings,” Alexander said. “Our team instantly knew we could build a landmark destination that would fit the needs of those looking for a cosmopolitan lifestyle in the growing city.”