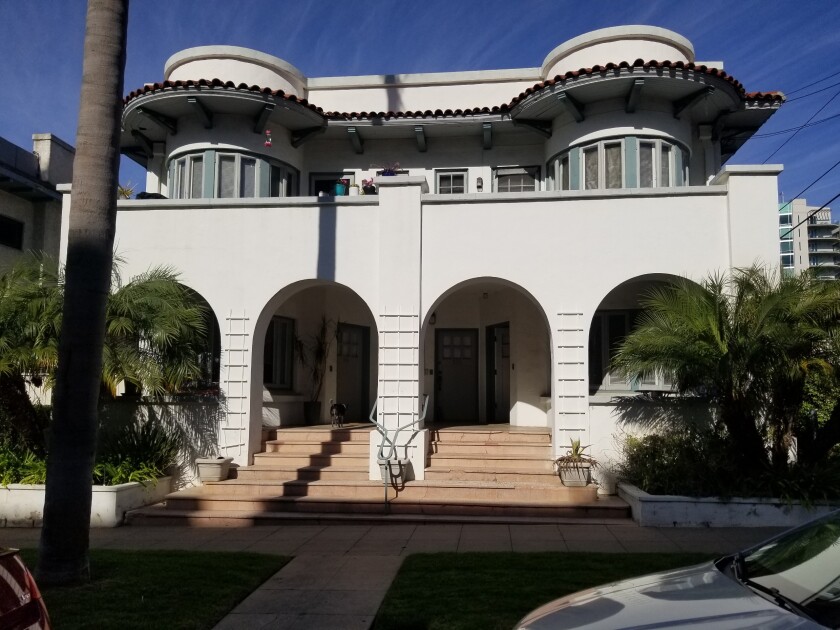 A developer is proposing a 20-story condominium tower in Bankers Hill, five blocks from a similar tower the City Council approved last year despite outcry from residents that it would damage neighborhood character.

The 214-unit building, proposed for Thorn Street between Fifth and Sixth avenues, could face even stronger opposition because the developer plans to demolish a historic structure that’s been on the site since 1910.

The new proposal would also displace some residents living in a historic building that would be demolished, a four-unit apartment complex on Thorn Street.

“This proposal is perfectly in keeping with San Diego’s needs and planning priorities,” he said.

Floit also touted plans to have retail shops and a restaurant on the ground floor of the project.

“The new element of the project is designed for maximum engagement at the street level,” he said.

Nearby residents and neighborhood leaders said that such dense projects don’t fit well in Bankers Hill, a historic area just west of Balboa Park where most of the structures are four stories or less.

They also expressed concerns that Floit may resist requests from the community for modifications that would help the new tower fit better with the surrounding architecture.

“Other recent towers in Bankers Hills chose a different path and saw the benefit and value of working with the community and made modifications to their projects,” resident Roy McMakin said by email. “Hopefully the 5th and Thorn developers will take this path.”

Floit plans to rebuild the historic structure that he would demolish at a nearby site on Fourth Avenue.

But Bruce Coons, the group’s executive director, said the project has some notable positive elements, including plans to preserve three additional historic structures on the property.

“It’s a significant benefit to get those three along Sixth Avenue restored,” Coons said. “It’s not easy, and it’s not inexpensive.”

Coons said his group hasn’t yet taken an official position on the proposal.

Instead of proposing to move the historic four-unit apartment building, Floit wants to take it apart piece by piece and recreate it a few blocks away.

Karen Butler, who lives in the four-unit apartment building that would be demolished, said she opposes the project for damaging neighborhood character and the area’s history.

She also said she thinks demolishing a building and then recreating it seems to “defeat the whole purpose” of preserving it.

Butler said the project will almost certainly displace her from the neighborhood, where rents are among the highest in San Diego.

The Uptown Community Planning Group, a city advisory group for projects in Bankers Hill and nearby communities, hasn’t had a chance to vote on the new proposal.

Soheil Nakhshab, the group’s chairman, said the group’s design review committee would probably analyze the project this winter and forward it to the full group for discussion in February or March.

Nakhshab said he has generally been a fan of recent development projects in Bankers Hill, noting that most of the tallest structures have been along the park on Sixth Avenue to avoid architectural conflicts within the neighborhood.

The project is taking advantage of a city “density bonus,” which allows developers to construct larger projects if they build rent-restricted units for low-income residents. Floit plans to build 20 such units on Brant Street near the border of Mission Hills and Hillcrest.

The 20-story tower, which would include 205 condos and nine “extended stay rentals,” would include four levels of underground parking.