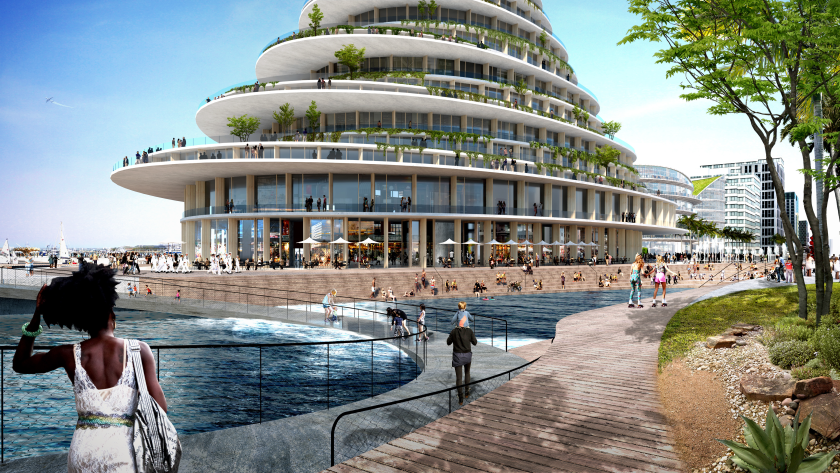 After spending more than four years refining a now $2.5 billion project, the developer picked to completely redo the existing 70 acres of land and water that make up San Diego’s Central Embarcadero appears to be on the cusp of receiving a key determination from the state agency tasked with protecting California’s tidelands.

The decision in question, from the California State Lands Commission, relates to whether a handful of unconventional tideland uses, such as office space and brand-name retail stores, being proposed by developer 1HWY1 in the 2 million square-foot Seaport San Diego project are consistent with what’s known as the Public Trust Doctrine. The doctrine, which dates to Roman law, seeks to protect the public’s right to use and enjoy tidelands.

Following years of back and forth, a preliminary finding in favor of the developer could come in a few months, 1HWY1 told the Union-Tribune and the agency confirmed. It would help finally push more formal — and public — consideration of a highly anticipated project that has yet to graduate from the realm of the conceptual to the actual.

Should State Lands find that project is consistent with the Public Trust Doctrine, Seaport San Diego would then begin to travel down the long road of approvals, as overseen by the San Diego Unified Port District, which holds the land on behalf of the public. It starts with board approval of the project description, ends with certification by the California Coastal Commission and includes a likely two-year-long environmental analysis period in between.

1HWY1 anticipates finalizing and submitting its formal project description to the port by June. If OK’d by the board of port commissioners, the project would then undergo environmental review. A best-case scenario could see the developer break ground in 2024 or 2025.

“This is a very large and complex project and the 1HWY1 team has proposed some unique programmatic components. Therefore, it will take time to ensure it’s done right — and we’re more focused on that than on how long it will take,” said Port Commissioner Michael Zucchet, who is the incoming board chair. “That’s not unusual anywhere, and certainly not unexpected when we’re talking about a potentially multi-billion dollar proposal on a prime location on the Southern California coast.”

Backed in part by the Jacobs family, Seaport San Diego is a total reimagining of downtown’s Central Embarcadero — the expansive, bayfront area that includes Seaport Village and follows the coast from Embarcadero Marina Park North to the G Street Mole, just south of the USS Midway Museum. In November 2016, 1HWY1 was selected by the Port of the San Diego to redevelop the subdistrict. 1HWY1 is headed by Yehudi “Gaf” Gaffen, Jeff “JJ” Jacobs (son of Irwin Jacobs) and Jeff Essakow, and is privately financed by the principals, friends and family members.

The project, themed around “ocean optimism,” has evolved over the years. It currently envisions a mix of hotels — including the signature one at the base of a 500-foot observation tower — shops, water and land attractions, an education hub, a large conference and concert venue, and office space reserved for ocean research-related enterprises. 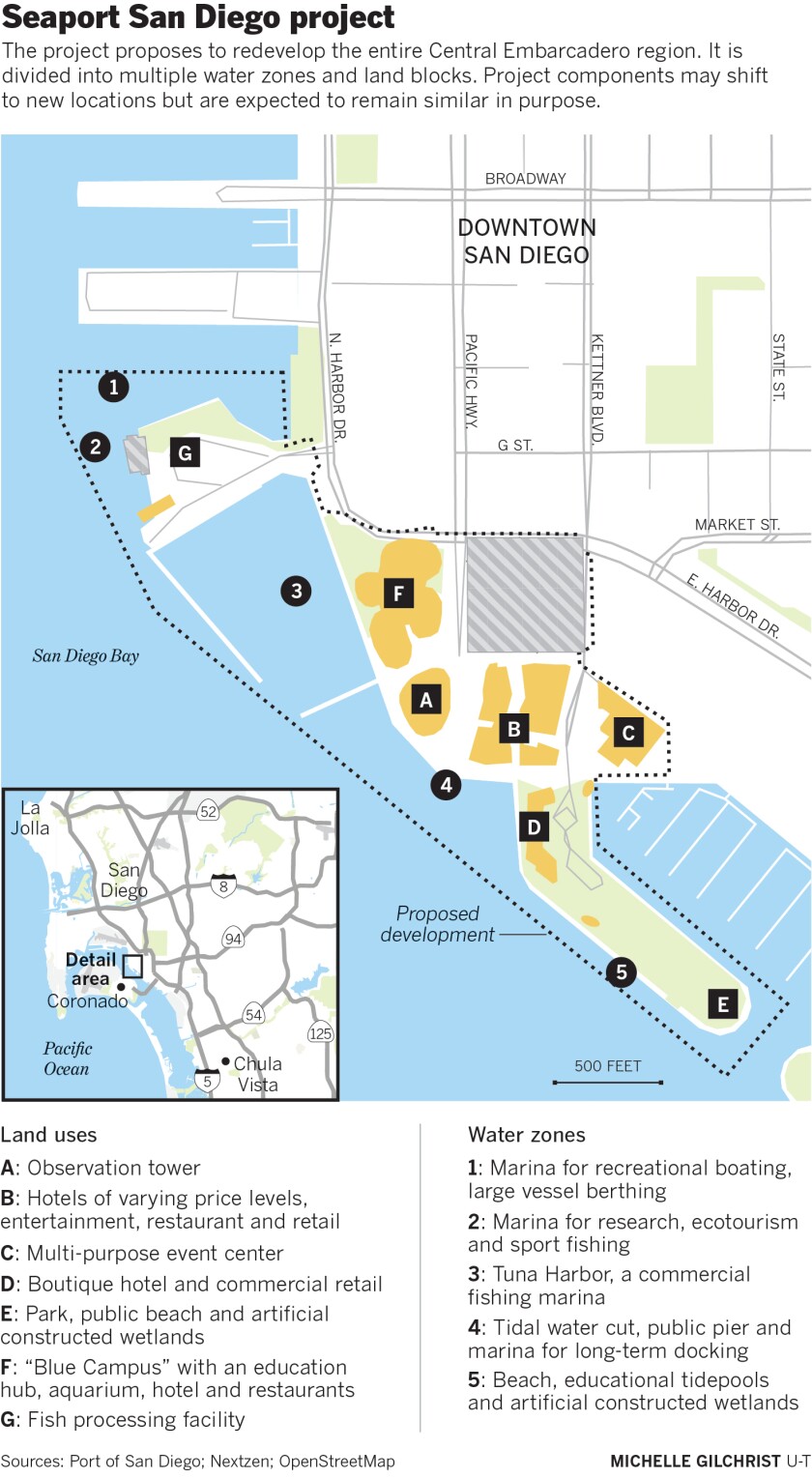 Some of the proposed elements, including those that promote commercial fishing, water recreation and even overnight stays, are an obvious, trust-approved fit for tidelands. Other features, some of which are necessary to ensure that the project is a moneymaker, fall into a gray zone that the developer, the port and the State Lands Commission have been working for years to clarify.

In December, port commissioners voted unanimously in favor of amending the port’s exclusive negotiating agreement with 1HWY1, allowing talks to continue. The original contract dates to October 2017 and has been extended several times. The board’s latest action extends the contract through Oct. 1, 2024, but also sets new due dates for project materials. The amendment also makes it more difficult for the port to cancel the agreement, an important condition that better protects Seaport San Diego financiers who have already invested $18 million in pre-development costs.

1HWY1 asked the port to consider the amendment to allow additional time to work through the Trust Doctrine consistency process, the design and entitlement phase, and financial feasibility, said Lucy Contreras, who is the port’s program manager for redevelopment.

“I think 1HWY1 has made significant progress on the proposed project and the port wants to keep the progress and momentum going,” Zucchet said. “There is obviously a very long way to go, including various future board actions and approvals, and our staff is working hard to facilitate the best possible redevelopment of the area. But I am excited about the possibilities that 1HWY1 is proposing to bring to the Central Embarcadero.”

All parties are characterizing the extended timeline as par for a very complicated course. That’s in part because the location, the port has said, is one of the most geographically significant sites on San Diego tidelands.

Still, previous statements suggest that working through the Trust consistency process is proving even stickier than planned. A recent split between the project and the port’s revised master plan process, which had been on parallel tracks, hints at the delay and means the developer will eventually need to seek a plan amendment.

“Some of the proposed uses are nontraditional, although we believe the doctrine does allow them,” said Gaffen of 1HWY1, who also runs San Diego-based construction management company Gafcon. “What is a 21st century-appropriate tidelands use? That’s what we’ve been educating (the commission) on for the past three years.”

Retail, for instance, is an allowed use so long as it is “visitor-serving” or water-dependent, although the Trust Doctrine is intended to be flexible and leaves room for interpretation. Souvenir shops, stores renting out water equipment and restaurants are all OK. However, boutique fitness studios, à la SoulCycle or Orangetheory, are a question mark, because they don’t have a direct tie to the water and can be located upland.

That explains, in part, some of the hold up.

1HWY1’s project includes 261,411 square feet of retail space, and the developer is anxious to expand the commission’s definition of visitor-serving to better match market conditions.

“Seaport seeks to achieve a mix of both major brands and strong local proprietors to create a strong and compelling experience for visitors who are looking to be entertained in their shopping excursions,” the firm wrote in a 2018 white paper on Trust Doctrine consistency. “Unique specialty movie theaters; innovative health, exercise and wellness offerings; food halls and local farmer’s and fish markets; and leading retailer/restaurants such as Eataly, Bonobos, Apple flagship stores and others point the way for the future. In keeping with the Public Trust Doctrine, Seaport San Diego will seek to encourage visitor public use and enjoyment of waterfronts by responding to this trend.”

In a similar vein, public schools and libraries are not allowed on tidelands, because they are municipal in nature. But 1HWY1 wants to build a “Learning Center,” as part of a larger ocean research venue the developer is calling a “Blue Campus.” The educational element would be an 80,000 square-foot hub for ocean-focused youth programs, career and college prep courses, and public workshops. The campus also calls for office space, which is typically a no-go.

“General office is not an allowed use, but office that is water-related, water-dependent, that can use saltwater from the aquarium, there’s an argument to be made there,” Gaffen said.

After receiving a project submission for consideration in August, the California State Lands Commission is now awaiting additional details on the developer’s retail uses and event center before making a preliminary determination, said Sheri Pemberton, who is chief of external affairs and has been involved in frequent talks with the firm.

“The retail component is a big element of the project and we’ve had many discussions with the port and the developer on the retail aspect,” she said. “The developer has committed to providing more specificity for the proposed retail (to show) how it’s interwoven with the broader project.”

The oversight agency will take the whole project — and not just its pieces — into consideration when assessing consistency, Pemberton said.

“Retail can be a component of a project that would help bring people to the water and make the space desirable and achieve the Public Trust Doctrine.”

Pemberton would not say when the agency would issue a preliminary determination, although she indicated that the developer’s goal to move the project forward in the first half of the year is realistic.

Per the amended exclusive negotiating agreement with the port, 1HWY1 has until Dec. 31 to submit its final project description to the agency.