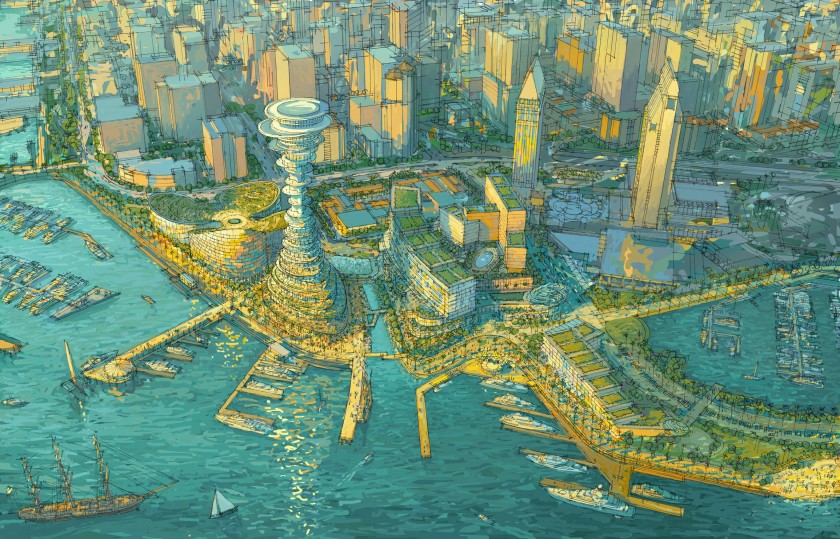 Seaport San Diego tower is like nothing else on California’s coast. That’s the problem

Have you seen the latest Seaport rendering of the observation tower? A lot has changed! Now the developer is thinking it will be the focal point of the project! It will be an iconic and engaging attraction with its top floors designed as observation decks, including one with floors made of nets for unmatched views and experiences. Other components will include a food hall, a bar, hotel and butterfly exhibit.

A proposed observation tower at the edge of Pacific Highway is a polarizing symbol of change that could make or break the larger, $2.4 billion redevelopment effort planned for downtown’s Central Embarcadero.

In some circles there is a sense that San Diego is missing an internationally recognizable calling card, as in a postcard-worthy — or in today’s vernacular, Instagrammable — destination that shouts, “Visit me.” The cylindrical tower with a cinched waist that is being touted as the high-flying replacement to a flat-by-comparison Seaport Village could change that.

That is, if California allows it.

A jaw-dropping symbol of change for the bayfront area that makes up downtown’s Central Embarcadero, the 500-foot tower is being heralded by developer 1HWY1 as the architectural focal point of its massive $2.4 billion Seaport San Diego project. Its location, where the bay ends and Pacific Highway begins, makes it geographically significant as well.

The full redevelopment effort encompasses 70 acres of land and water along Harbor Drive and is currently in the initial planning stages. Its program envisions a total of 2,050 hotel rooms spread across different properties, including 385 rooms in the base of the tower. Also proposed is a 170,822-square-foot aquarium, a 110,247-square-foot event center, 261,411 square feet of retail space, and 159,454 of office space reserved for ocean research-related enterprises.

In June, 1HWY1 submitted a formal project proposal to the Port of San Diego, which has permitting power over the tidelands. Staff at the agency are vetting the plan, which has evolved since the developer’s first successful bid to redevelop the site. Staff expect to present Seaport San Diego to Port Commissioners for preliminary approval in August or September.

The tower is, by design, a spectacle — San Diego’s version of the Space Needle.

“Nothing like this has been done on the water in California,” said Yehudi “Gaf” Gaffen, who runs 1HWY1.

There is a reason for that. Most coastal zones in the state are subject to a 30-foot height restriction thanks to the 1976 Coastal Act adopted by the California Legislature. The legislation also made permanent the California Coastal Commission, first established in 1972, as a quasi-judicial agency with oversight over water-adjacent development and a mission to protect public resources. Downtown San Diego is exempt from the coastal height restriction, however, leaving the port in charge of height limits for properties west of Pacific Highway and south of Harbor Drive.

That does not mean the Seaport San Diego project can be masterminded, let alone built, in a bubble. The Coastal Commission will have the final say. Any coastal permits issued by the port for the project can be rejected by the higher-ranking agency if they aren’t consistent with state law, which is open to interpretation.

As it stands, the agencies appear to be an ocean apart on what should happen with the Central Embarcadero land.

The port has long believed the site, where the city meets the water and activity is bustling, demands a world-class feature.

“When I think about the tower, I think back to the original (request for proposal) that was prepared for this development,” said Tony Gordon, who is the port’s director of real estate. “The RFP asked for submissions that included iconic architectural features.”

Gaffen, who runs San Diego-based construction management company Gafcon, delivered. His 2016 proposal started with a love-it or hate-it spire. That has, with the help of acclaimed international architectural firm Bjarke Ingels Group, morphed into something equally polarizing. BIG, as the firm is known, has a knack for eye-catching skyscrapers — it is the architect behind the stacked-box design of the in-progress Two World Trade Center building in Manhattan. Here they’ve designed a 342,709-square-foot attraction that is part hotel, part educational theme park.

While it will be some time before the Coastal Commission formally weighs in, the staff already is raising strong reservations about the height and enormity of the tower.

“We have concerns about the bulk and scale of the project in general,” said San Diego coastal planner Melody Lasiter.

San Diego’s indoor-outdoor culture, as well as the city’s waterfront topography, played muse for the feel of the tower, said Daniel Sundlin, who is a partner at BIG. The hourglass-shaped building is thick at the base, slim in the middle and wide again at the top. Its roundness is meant to reflect the circulation and flow of people in and around the structure. And its design, which centers around a stack of spinning discs, should evoke different images at varying elevations and vantage points, Sundlin said.

So someone outside the tower on the ground might look up and associate the building with a cascading, hanging garden, whereas a viewer at the very top could look out at the horizon and feel the sensation of floating above the clouds.

Aside from ground-floor retail and food options, most of the tower’s base would consist of hotel rooms for paying guests. The broader public, however, is far from excluded from enjoying the property’s views. In fact, people will be encouraged to roam around the tower’s highest tier, where a number of yet-to-be-determined exhibits will take over several floors.

“There is the ability for everyone, rich or poor, to get up high and see the view,” Gaffen said. “It is a celebration and recognition of location, the beginning of Highway 1.”

One might ride an elevator all the way to the top and then move between levels in a spiral-like fashion, Sundlin said. On those floors, his firm is toying with seemingly far-fetched concepts he referred to collectively as a “learning laboratory in the sky.” Ideas include a butterfly exhibit, a net suspended in the air that patrons can climb on, a wind garden where visitors could experience sustainable technology and an outdoor auditorium for basking in the clouds.

The most bizarre scheme involves a vertical aquarium that would span the entire length of the tower and emulate the varying depths of the ocean.

Terzi, who is tasked with selling San Diego to people in other cities near and far, speaks of the tower as the promotional prize that’s always been out of reach.

“We’re not an unknown, but we’re not as recognized as many other international destinations,” he said.

His agency defaults to Balboa Park’s California Tower and the Coronado Bay Bridge to portray the town to outsiders. But those images don’t always resonate abroad.

“We have long looked for the iconic structure, that if you saw it, you would immediately recognize (San Diego). Frankly, we don’t have that strong image,” Terzi said.

Gaffen’s tower is a powerful visual. But for some coastal purists, the emotional reactions are likely not the ones intended by the developer or his famous architect.

A 500-foot tower, in this particular location, is a striking affront to coastal norms, said Sara Wan, a former coastal commissioner and an expert on coastal regulations.

“If you start allowing high-rise development along the coast, you destroy the ability of the public, in general, to see the coast,” she said. “When you do something like (the tower), you set a precedent that can have other consequences.”

The fear is not lost on Lasiter, who is a Coastal Commission planner with the agency’s San Diego office and who has been briefed on the project. The tower’s height, the width of the base and its location on the promenade are all problematic elements, she said.

“Our major concern is that the existing development down at Seaport Village right now is easily accessible for a wide range of incomes. There’s a lot of passive space, and anyone can go to Seaport Village and walk around. With the redevelopment, it might not be that way,” Lasiter said. “Our focus is the public’s ability to recreate there at low or no cost.”

In other words, the project is potentially too much, too close to the water, where sea level rise, obstructed view corridors and limitations on public access are crucial factors.

The Coastal Commission won’t officially get its say until much later in the process — only after an environmental impact report is completed and approved by the port — but a determination that Seaport San Diego is inconsistent with the Coastal Act would be a significant blow to proponents. It could indefinitely stall any makeover to the Central Embarcardero.

The 1HWY1 team acknowledges, but hopes to correct, the disconnect between its plan and what the commission wants. Public access? More than 70 percent of Seaport San Diego’s footprint is reserved for parks, promenades, plazas and other public amenities, the developer’s planners note. And the height of the tower? It’s democratizing access to unrivaled waterfront views, the argument goes.

“It’s no surprise at all that the Coastal Commission is concerned about (the tower). That’s a very uncommon amount of bulk and mass in the coastal zone,” said Allison Rolfe, an environmental consultant who is advising the development team on how best to navigate the murky waters of the state regulatory agency, which she knows well. Rolfe is friends with ex-Commissioner Wan and previously worked for current Commissioner Steve Padilla.

“There’s a way to do this project in a way that Melody (Lasiter) and others can get on board with,” she said.

However, what that looks like exactly, no one can say. It’s just too early in the process, says Rolfe.

“We won’t figure out how to get to a win-win until the very end,” she said.

First comes the port’s preliminary approval later this year, followed by the roughly two-year process to complete an environmental impact analysis. During that period the Port Master Plan Update, which creates the land-use framework for Seaport San Diego’s major changes to the tidelands, should be wrapped up.

The thinking is, that by the time the twelve voting members of the Coastal Commission take a position, any controversy surrounding the project should have already washed out to sea.

“(Coastal Commission) could stop it,” Gaffen said. “If they are happy, then (the project) could slide through.”