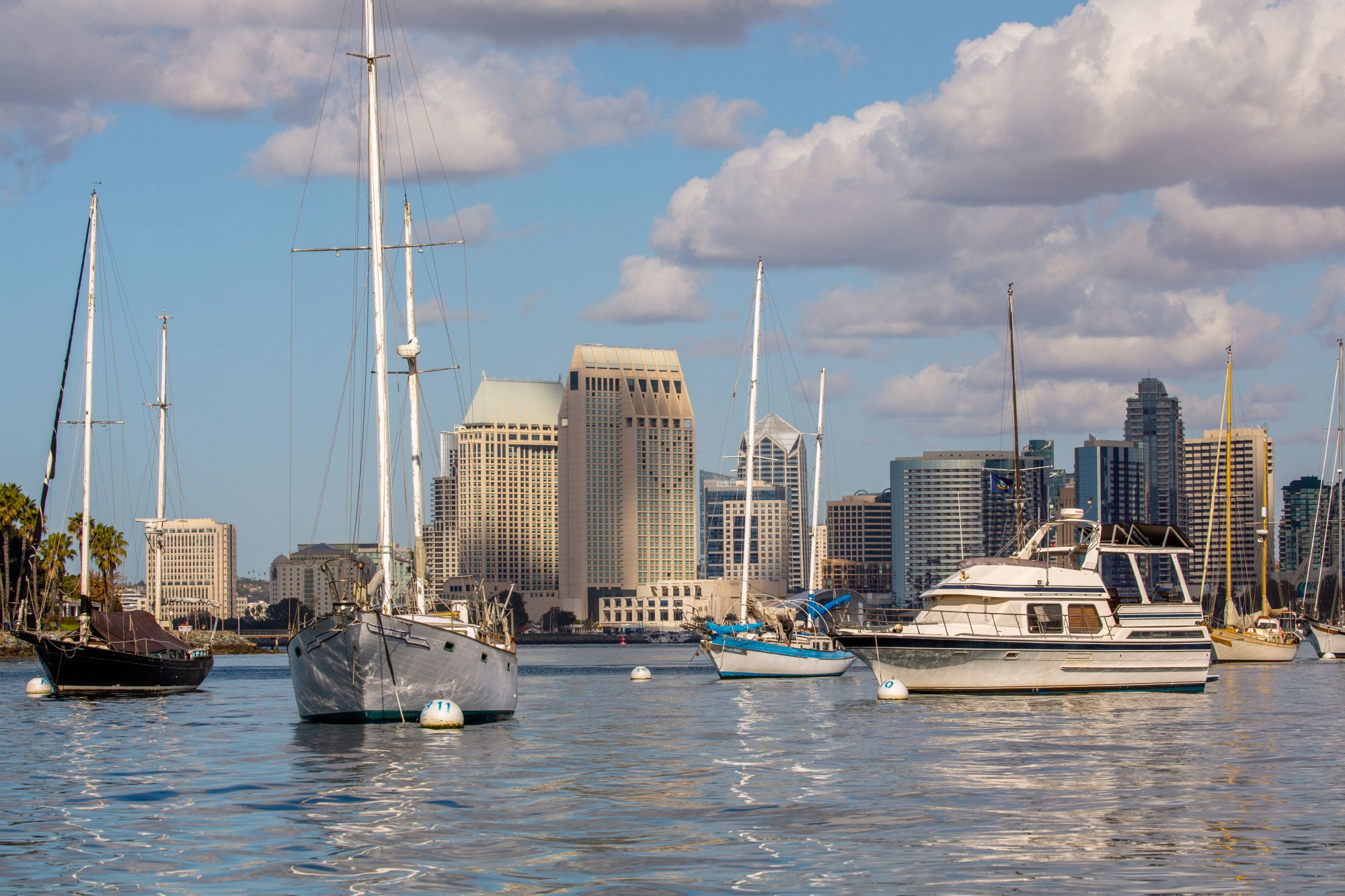 The Port of San Diego is arguably the most misunderstood government entity in town. Milestone decisions queued up in 2021 will make it more consequential than ever

Some of San Diego’s most celebrated bayfront destinations — Seaport Village and the Coronado Ferry Landing — are governed by an unfamiliar entity with power that, in 2021, will prove more consequential than ever.

Formed by the state in 1962, the San Diego Unified Port District spans 34 miles of coastline from Shelter Island to the border. The land was granted to the agency to hold on behalf of the public; it includes tidelands in San Diego, National City, Chula Vista, Imperial Beach and Coronado. It’s a self-funded, non-taxing entity governed by a board of seven commissioners who are appointed by their member cities.

As such, it is arguably the most misunderstood government entity in town.

“It’s not unusual for people to not understand what a port is or what it does. Most people think a port has to do with shipping,” said William Fulton, who is the director of Rice University’s Kinder Institute for Urban Research and was once the city of San Diego’s top planner. “Essentially, the Port of San Diego is a landowner. But unlike other landowners, they get to regulate their own land. … They control all the land along the bayfront.”

The power is manifested through meaningful changes to iconic San Diego locales.

For instance, the port is the behind-the-curtain entity that has decided to eventually kill off Seaport Village in favor of a $2.5 billion plan to redo San Diego’s Central Embarcadero. It’s the authority with immediate purview over what is appropriate for the East Harbor Island area opposite the airport — hotels and a TopGolf, perhaps — that serves as the welcome mat for visitors and was previously used by car rental companies. And, by recently rejecting the Fifth Avenue Landing hotel project, the port kept alive the city of San Diego’s long-held dream to expand the convention center.

It’s also the agency rewriting the narrative for not-as-desirable coastal locales. Take Chula Vista’s bayfront. The port has for years been working to orchestrate the conversion of 535 acres of vacant and industrial property into a thriving South Bay tourist attraction, starting with a fancy RV park, beautified beach and a billion-dollar resort hotel.

Put another way, the agency’s board of non-elected officials has total oversight over the region’s best real estate assets — waterfront property.

“(The port) owns and controls, and determines the use of, some of the most important and valuable land in San Diego,” Fulton said. “(The agency) shapes the bayfront in a way that nobody else does.”

The special district all comes with a unique tension: How does the port protect the coast and profit from it at the same time? Add to that a pandemic that has drained the port’s savings account and a climate where all decisions are examined through the microscope of equity, and you get an agency facing financial ruin or political suicide — or both — without the right governance.

Enter Joe Stuyvesant, the former civilian Navy executive who, as of Feb. 1, is the new president and CEO of the San Diego Unified Port District.

The job description is a doozy.

Charged with overseeing the agency’s 552 full-time employees, Stuyvesant must also work to repair fractured relationships with hundreds of tenants, including restaurants, hotels and marinas. Tenants are essential to the port remaining solvent — after all, rent payments equate to port revenue — but some have called into question the port’s approach to pandemic assistance.

Stuyvesant must also appease commissioners with disparate priorities and varying political ambitions. And brand-new commissioners Jennifer LeSar, appointed by the City of San Diego, and Sandy Naranjo, appointed as the National City representative, mean there will be new eyes on old problems.

Take the port’s working waterfront conundrum. Industrial operations have, for decades, polluted the air in adjacent communities, with the problem coming to a head when the previous board considered, but did not approve, a lucrative contract with Mitsubishi Cement Corp. The firm’s operations would add hundreds of new daily truck trips at the port’s Tenth Avenue Marine Terminal, emitting even more diesel exhaust in neighborhoods like Barrio Logan where the trucks pass through.

The to-be-determined matter has made defining a clean air action plan of top importance for Commissioner Michael Zucchet, who as the board chair for 2021 gets to set the agency’s priority list.

“Rather than dealing with these on a project-by-project basis, I think (we need) a more comprehensive, front-end action plan that makes it clear not just what the goals are but what the port is going to do about, for instance, helping to build out charging infrastructure for zero-emission trucks,” Zucchet said. “What is the port willing to do to support its tenants so that we can have a fully electrified port by 2030, for instance?”

There are also major maritime matters to sort out.

The agency had hoped to earlier this year get on the books charter rules that would finally put to bed a long-standing controversy. Above-board operators of whale watching tours, party boat rentals and sport fishing adventures have found themselves in competition with rogue boat owners renting out private vessels for recreational use without oversight. The latter are not considered illegal, per se, but they do operate outside the boundaries of what’s allowed. However, the port’s proposed regulatory fix includes a universal permit system with conditions that have riled up the rule followers, which are also some of the agency’s biggest revenue-generating tenants.

Perhaps most importantly, Stuyvesant needs to get across the finish line a 30-year development plan and policy guidebook that’s been in the works since 2013.

That is easier said than done. Although the agency has begun an environmental review of the new port master plan, as the document is called, the draft is not quite finished. And at least one blank spot — Navy Pier — has legal ramifications.

Today, Navy Pier is nothing more than a parking lot for the popular USS Midway Museum. It is supposed to be a 5.7-acre public park. An agreement struck between the port, museum operators and the California Coastal Commission 20 years ago required the park to offset the retired aircraft carrier’s blockage of bay views. The Coastal Commission, which is the higher-ranking agency that will eventually OK the port’s master plan, has sought for years to enforce the agreement. That means doing nothing with the pier is not an option should the port wish to avoid a costly lawsuit or have its master plan put on ice.

Stuyvesant’s ability to navigate through dicey conditions, then, will be immediately tested. His predecessor believes the veteran executive is more than capable.

The curve may bend in new directions this year as normal considerations get overshadowed by existential ones.

An estimated $18 million deficit is projected for the current fiscal year ending June 30, forcing the port to substantially dip into a savings account once flush with proceeds. The port has said that it expects a 45 percent reduction in reserve cash between the end of fiscal 2019 and fiscal 2021, leaving about $52 million.

Commissioner Dan Malcolm set the stage for drastic action at the most recent board meeting, pointing out that the anticipated deficit excludes around $7 million in major maintenance projects and equipment replacement efforts that have been kicked down the road.

“I don’t think anyone at this point — not staff, not (CFO) Bob (DeAngelis), not the commissioners — no one can say with any degree of certainty how long COVID is going to affect the region or how long this pandemic is going to affect the financial performance of the port,” he said. “Our real estate revenue at the port is 60 percent, roughly, of our total port revenue and that’s based on tourism, conventions, hotel, cruise, all of which has been … devastated by COVID.”

A return to familiar financial footing will take years, he said.