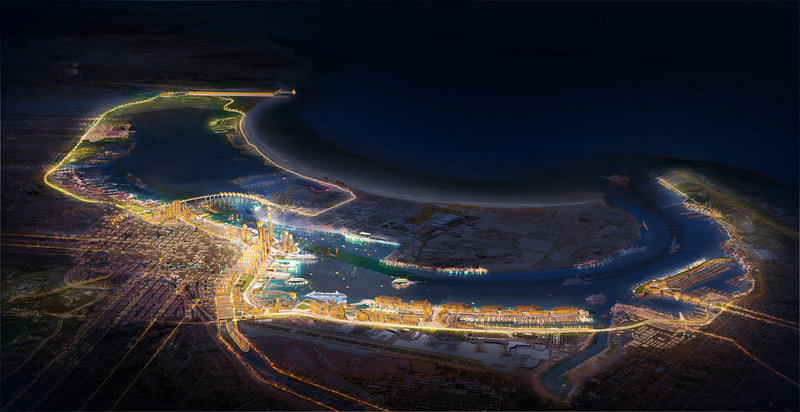 Aerial view of the Port Master Plan Update plan for San Diego Bay with Downtown to the left and Shelter Island to the right. COURTESY PHOTO

A revised draft for the Port Master Plan Update has concentrated future hotel rooms on Harbor Island while preserving both La Playa piers and the Marlin Club sportfishing on Shelter Island.

The Port’s objective for the PMPU is to create a thoughtful and balanced approach to future water and land uses on and around San Diego Bay for future generations. Its latest PMPU draft considers and reflects extensive community input received since its discussion draft was released in April 2019.

The Port Master Plan serves a number of functions. It determines where port activities take place and where public access is allowed. It also guides where recreational amenities and view corridors are to be located, and where commercial uses like hotels, restaurants, and visitor-serving retail may be built. It also helps to protect and restore the natural environment.

Port planning director Lesley Nishihira said the master plan, certified by the California Coastal Commission in 1981, has been amended 40 times since then. She said the Port decided the master plan needed an overhaul, adding a decision was made to “update the entire plan” instead of amending it piecemeal “to allow special projects.”

“This is really the first complete update that we’ve done,” Nishihira said. “The plan had really become outdated and we said, ‘Let’s step back and take a holistic view of our master plan to come up with a vision and some guiding principles.’”

Nishihira said more than 3,000 individual comments have been received from the public in the PMPU, the majority coming from Peninsula and Coronado residents.

“We got a lot of feedback about development intensity on Shelter Island and visitor-type uses there,” she said. “We had originally planned on hotel rooms in Shelter Island, but those have been removed. The revised draft now proposes hotel development on Harbor Island only, which doesn’t have the same view-blockage issues.”

Regarding La Playa piers, Nishihira noted: “Those piers were initially constructed as part of private residences, but then the state tidelands became owned and managed by the Port. For many years, those piers have been leased to the adjacent homeowners for private use. But the Coastal Commission previously ruled that the piers had to become 100% public or be demolished. Our board has directed us to allow the piers to remain as they are today. We will see how the Coastal Commission responds to this.”

Like the piers, Marlin Club sport fishing is proposed to be left untouched in the PMPU.

The revised PMPU is now out for public review. After that, Nishihira said Port staff will sift through all the public comments received.

The San Diego Unified Port District was created in 1962 to manage 34 miles of San Diego Bay waterfront along Chula Vista, Coronado, Imperial Beach, National City, and San Diego including Shelter Island. The lands are to be used to benefit the statewide public in enhancing commerce, navigation, fisheries, and recreation.

The Port encourages and welcomes additional public feedback and looks forward to continued community engagement. To review the PMUP Revised Draft and provide feedback, go to portofsandiego.org/pmpu. Feedback will be accepted through Tuesday, Nov. 17.