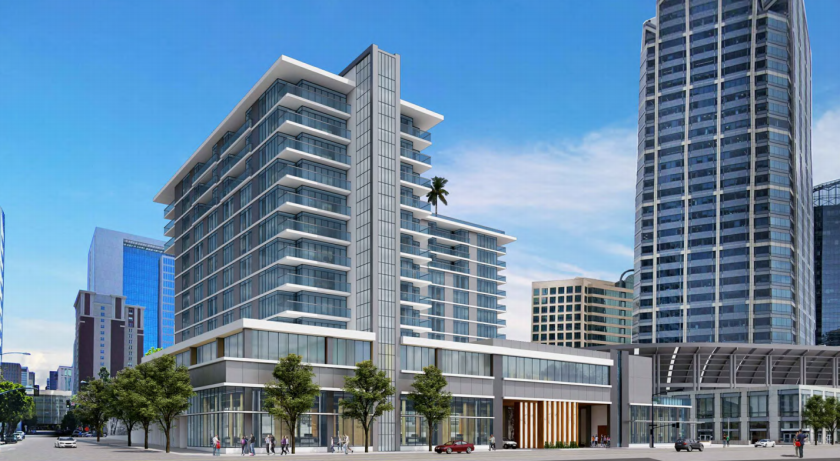 Two America Plaza is mainly a hotel, but will also have 48 dwelling units and 23,000-square-feet of commercial space

The location is considered ideal because it is close to transit, in the heart of downtown and about 1,400 feet from the waterfront. It will take the place of a parking lot just north of 500-foot tall One America Plaza, San Diego’s tallest building, on B Street bounded by Kettner Boulevard and India Street. The site had been talked about as a place to develop a hotel since the 1990s.

Board members of Civic San Diego, downtown’s planning agency, said the project had made good use of a site that had been underused for decades.

“I think this building fits in well,” said board member Maddy Kilkenny.

The project is being developed by Crown Invest, a group of Mexican investors mainly from Guadalajara. The company is incorporated in Delaware. The building was designed by San Diego-based architectural firm Awbrey Cook Rogers McGill.

“It will tie everything together,” she said. “It’s going to revitalize the district. I think this is a vital, important part of downtown.”

Two America Plaza will also include meeting and ballrooms, outdoor common space, gym and rooftop pool deck. The amenities will be shared with hotel guests and residents. There is already a four-level subterranean parking garage near on the site that will handle much of the parking, but there will also be a valet system set up for arriving guests.

Much of the retail space will be along the C Street corridor across from the MTS Trolley Station, and the hotel lobby will be located on Kettner Boulevard. A blank wall on the building, a major pet peeve of downtown planners, will be turned into a painting or mural.

Also at the meeting, the board approved a 39-story apartment complex with 427 apartments in the East Village. The project from Canadian developer Pinnacle International is planned for a block bounded by Park Boulevard, 11th Avenue, and B and C streets. Pinnacle plans to fulfill its low-income housing requirements by putting 30 rent-controlled apartments in a separate building.

Pinnacle’s larger plan would take several projects across the city and put low-income apartments in a single East Village building. That project, called Pinnacle Pacific Heights, has yet to be approved. Some Civic officials have criticized the project for creating two classes of residents and having a separate “poor door” for low-income renters to enter.

Much of the upcoming downtown projects will soon transfer to the city and away from Civic San Diego. The agency was stripped of much of its power as the result of a lawsuit by a former board member alleging it lacked meaningful oversight, and was too friendly with developers.