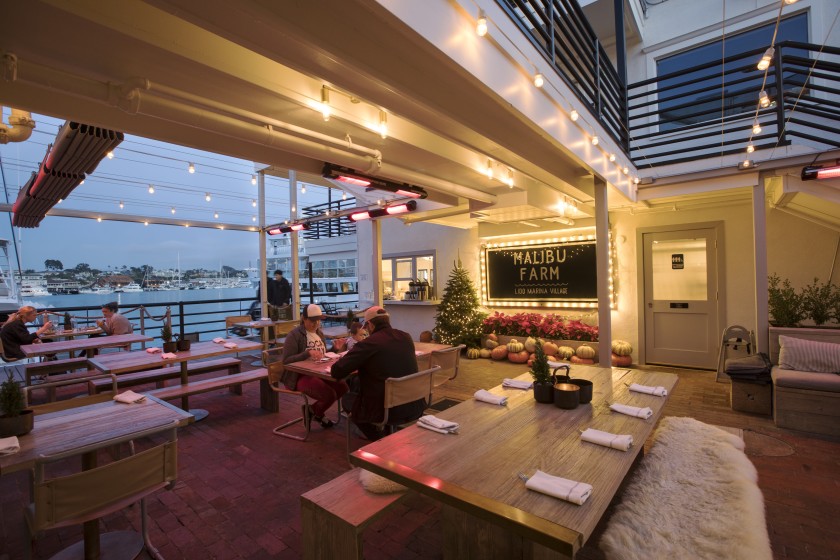 Malibu Farm has three locations in California, including this venue in Lido Marina Village in Newport Beach.(Courtesy of Malibu Farm)

Harbor House, a 40-year-old mainstay on San Diego’s bayfront, will be replaced by a well-known Malibu restaurant concept that local port officials are hoping will revive visitation to the aging Seaport Village.

San Diego port commissioners on Tuesday approved a 10-year lease with Malibu Farm, which plans to transform the 14,000-square-front Harbor House into much more of an indoor-outdoor venue that will include, in addition to full-service dining, an ice cream and espresso bar and a home goods store.

Malibu Farm, which was founded in 2013 by chef Helene Henderson and her husband, actor-director John Stockwell, currently has eight locations, including Malibu, Newport Beach, Miami, New York and Tokyo. The Port of San Diego estimates that the restaurant, once completed in 2022, could deliver $5.8 million in net lease revenue over a 10-year period.

As part of the lease agreement, which includes an option for a five-year extension, Malibu Farm will get a subsidy from the port of $2.8 million to be used for overhauling the space. Stockwell estimates that the restaurant group will spend as much as $4 million on upgrading the Harbor House, including putting in an entirely new kitchen.

“It’s larger by a lot than any of our other locations,” said Stockwell, whose most notable acting roles include “Cougar” in Top Gun. “We have always seen the value in outdoor dining, and one of our big goals for the Seaport Village location is to make it more indoor-outdoor than it is now. Right now it’s almost all glassed in and hermetically sealed.

Port officials boast that landing Malibu Farm as a tenant was a major coup for San Diego.

“It’s hard to overstate how big a deal this lease is for the port,” said Tony Gordon, the port’s director of real estate. “They are highly sought after, an internationally renowned restaurant operator, and tenants of this caliber do not come easily. It’s not a tenant you pursue, they pursue you. This also is a big deal for Seaport Village. It will increase foot traffic to the entire shopping center as a bridge between the two sides of Seaport Village.”

The four-decade-old waterfront center is destined for an eventual redevelopment as part of an ambitious $2 billion plan encompassing a total 70 acres but the project is still years off. Under a best-case scenario, groundbreaking would not be until 2025, pending numerous approvals.

In the meantime, the Port of San Diego is seeking to maximize revenue at the center. Since taking over operation of Seaport Village in October 2018 from former operator, Terramar Retail Centers, the San Diego Unified Port District has been more aggressive in attracting new tenants to the center, working with an outside broker to help consummate deals. The port currently has lease agreements with 60 tenants at Seaport Village, with 43 of those retail outlets and 17 of them food and beverage tenants. There remain nine vacancies.

The owners of Harbor House had been interested in continuing to operate the restaurant and last September agreed to a one-year lease with four one-year extensions, said port spokeswoman Brianne Page. Not long after, though, Malibu Farm expressed interest in the Harbor House space, which prompted the current owners to request the opportunity to submit its own proposal.

After evaluating the Harbor House submission, port staff decided to go with Malibu Farm, Page said. It was seen as “more competitive,” she said, “and aligns with the port’s objectives for Seaport Village, which are to increase occupancy, attract additional foot traffic and generate higher revenue to the Port.” Harbor House’s current lease will expire in September of next year.

While the port did not release the proposal from Harbor House, future rent from Malibu Farm far exceeds what the current operator has been paying. Harbor House, whose current lease has been extended through September of next year, paid $58,604 in annual rent from Oct. 1 of 2018 to Sept. 30 of 2019, according to the port. The subsequent year, it paid $64,464, Page said. In contrast, Malibu Farm’s minimum annual rent will start out at $602,000, and its lease will be subject to even higher rent, based on its sales. Once its revenue hits a certain point, it would be subject to paying 6 percent of annual gross sales.

Malibu Farm anticipates eventual annual sales of $13 million, according to the port.

Commissioners cheered the selection of Malibu Farm as its newest tenant, saying it was in line with their efforts to upgrade the waterfront tidelands it controls in order to attract growing numbers of locals and tourists. The Port District this year has felt the financial pinch of the pandemic, especially in light of convention cancellations over the last six months and a halt to cruising.

“It just goes to show you the value of this waterfront land that we manage,” Commissioner Marshall Merrifield said. “And in a tough time like now, retail and restaurants are looking to deploy and expand with us, so it’s sort of a validation of the strategy we’ve had for years of finding the marketplace for land that we are entrusted to manage.”