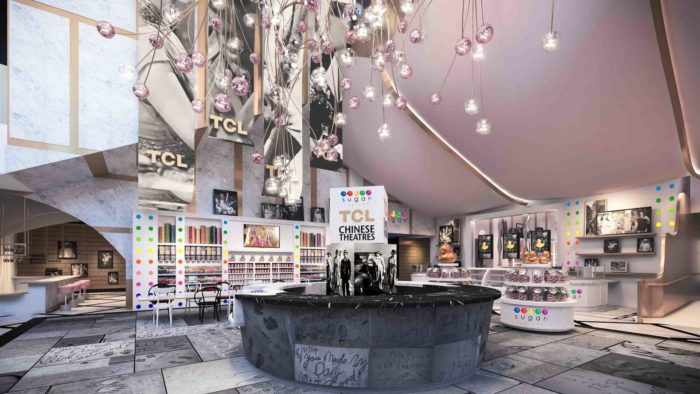 I can’t wait for this to open! Sounds like a special new addition to our downtown that will draw a lot of attention.

Promising more than a night at the cinema, a new entertainment complex where food, movies and nightlife commingle is anticipated to revive G Street in San Diego’s Gaslamp Quarter when it opens later this month.

Called Theatre Box, the 73,000 square-foot venue is a remake of the former Pacific and Reading cinema building at 701 Fifth Ave. Like its predecessor, Theatre Box is a multiplex, however this sequel is full of food and beverage plot twists as imagined by its female directors, Alwyn Hight Kushner, president of TCL Chinese Theatre in Hollywood, and Charissa Davidovici, founder of restaurant and retail chain Sugar Factory.

“We have worked together to launch a new brand,” Davidovici said of the pair’s first entertainment complex, which they’d like to launch elsewhere around the country. “When you think of the movies, what do you think of? Popcorn and candy. But you haven’t seen a theater with the concept of unlimited candy, food and VIP experiences.”

When the first phase opens in mid-October, visitors will get to glimpse part of the vision. It is, perhaps, best encapsulated by the enormous pink and white chandelier that rains down from the 45-foot ceiling above the expansive lobby, which doubles as an extreme candy shop.

Upstairs, guests will find a luxury cinema with eight auditoriums, each outfitted with leather recliners, and offering full food and drink service. The theaters also include so-called “lily pads,” or open seating at the front where kiddos can sprawl out or squirm around. The adjacent concession stand on the second level is a full bar with seating for anyone who wants to peer over at the people down below.

Davidovici expects the restaurant to open shortly after the cinema. The attached 3,000 square-foot Chocolate Lounge, slated to debut in early November, offers yet another descent into decadence. It is intended as more of a date-night or late-night retreat with a built-in deejay booth to set the mood.

Later, likely early next year, TV personality Nick Cannon will open his second Wild ‘N Out Sports Bar and Arcade. It’s a 14,000 square-foot space housed within the larger Theatre Box and modeled after Cannon’s MTV show of the same name. The venue is designed for impromptu celebrity comedy face-offs between Cannon and friends, or deejay-ed dancing.

Even further down the line, Theatre Box owners plan to open up a 6,000 square-foot bar and lounge experience on the building’s rooftop, which offers views of neighboring downtown buildings and high-rises.

If Theatre Box sounds like a lot to take in — that’s because it is.

“People could come down and spend an entire night in that one venue,” said Michael Trimble, executive director of the Gaslamp Quarter Association. “The combination of a high-end theater experience that fits the neighborhood … great restaurants, a nightclub experience; you get a little bit of everything.”

Trimble anticipates the multifaceted venue will help draw more locals, tourists and conventioneers to the historic downtown quarter, which already attracts from 8 million to 10 million visitors a year.

However, the region, known for high restaurant and business turnover, poses a few challenges — parking being one of them. Plus, the Theatre Box owners, who have leased the building for 30 years from owner OliverMcMillian, have already had to deal with lengthy project delays and cost overruns.

Theatre Box declined to share the project cost, but the partners are likely paying $30 to $37 per square foot to lease the space, according to market analysis by CoStar. At the low end of the range, the group would be spending $2.2 million per year on rent.

But Theatre Box brings with it a bit of Hollywood star power — and maybe even some reality drama.