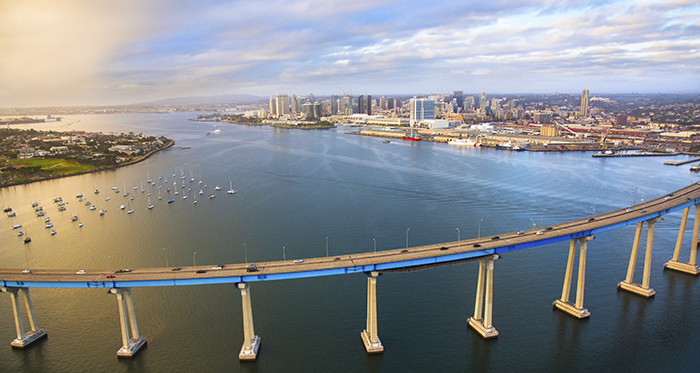 ByFrancine Finn
Scott-Finn & Associates
0
Who knew??  All these interesting bits and pieces about our wonderful city of San Diego will make you the hit of the next Trivia Pursuit party.   I knew some of these interesting historical facts, but I definitely did not know that Ronald Reagan was the first to drive across the Coronado Bridge when it opened in 1969.  While we all realize that the San Diego International Airport is getting busier, did you know that it is the busiest one-runway airport in the country and the second busiest in the world, falling just behind London Gatwick?

How many of these do you know?

1. Holy guacamole, Batman! San Diego produces more avocados than any other place in the country.
2. Beachy crooner Jason Mraz owns a 5.5 acre avocado farm of his own in the area.
3. In fact, San Diego has over 7,000 farms, the most in one city in the United States.
4. As if San Diego wasn’t a vacation enough, over 200 cruise ships berth in the San Diego harbor every year.
5. Hypnotism is banned by public schools in San Diego.
6. The first driver across the Coronado Bridge when it first opened was Ronald Reagan in 1969
7. La Jolla used to have an area of houses built strictly for small people, sometimes referred to as “the munchkin houses” due to the fact that they were inhabited by some of the actors who played Munchkins in the Wizard of Oz film.
8. Invest in a good flea collar for your furry friends. San Diego boasts more fleas than any other city in the U.S.
9. The San Diego Zoo played home to the first baby panda born in the Western Hemisphere since 1990 with Hua Mei, born to a pair of giant pandas. The panda even got a café named after her in the zoo.
10. Water is a hot commodity in San Diego. The city imports an estimated 80 to 90 percent of its water, totaling 168 million gallons a day.
11. If the imported water of San Diego was placed into gallon bottles, they would circle the earth more than one and a quarter times.
12. You get what you pay for in San Diego. The city’s Dick’s Last Resort bar and restaurant encourage their staff to be as rude and obnoxious as possible as part of their dining experience.
13. Pop-punk lovers might enjoy discovering the band Blink 182 hails from the San Diego area.
14. Songs written about San Diego include Bing Crosby’s “Where the Turf Meets the Surf,” Bruce Springsteen’s “Balboa Park,” and Eric Clapton’s “The Road to Escondido.”
15. San Diego is skater heaven. Olympian Shaun White was born here in 1986 and the legendary Tony Hawk was raised here, too.
16. Officials of San Diego have declared May 29th to be Tony Hawk Day in the city.
17. Charles Lindbergh made history when he flew from San Diego to New York and then non-stop to Paris on the Spirit of St. Louis in 1927.
18. In fact, the city of San Diego has never won a World Series, a Super Bowl, or an NBA Final title
19. Legend has it that the San Diego Chargers curse was brought on in 1970 when the team traded their wide receiver, Lance Alworth, to the Dallas Cowboys.
20. Actress Cameron Diaz was born in San Diego in 1972.
21. San Diego International Airport is the busiest one-runway airport in the country and the second busiest in the world, falling just behind London Gatwick.
22. Built in 1863, the Star of India is the world’s oldest active-sailing ship which calls its home a port in San Diego. After completing 21 circumnavigations, the Star of India has survived being stuck in ice in Alaska and going aground in Hawaii
23. The Old Globe and the La Jolla Playhouse have successfully sent more shows to the bright lights of Broadway in New York City than any other city in the country.
24. It’s against the law to swim in any of the lakes in San Diego. But you’re not missing out on much since they’re all man-made.
25. The country’s first drive-in restaurant, Oscar’s, was opened in San Diego by Robert Oscar Peterson who later founded the fast food chain Jack In The Box in 1951.
26. The Hotel Del Coronado is the country’s largest wooden structure. It featured the first electric-lit outdoor Christmas tree in 1904.
27. San Diego was known as the Tuna Capital of the World from the early 1930s through the late 1970s.
28. The weather might be a dream in San Diego, but the traffic isn’t. The average motorist spends a grueling 256 hours a year sitting in their car.
29. San Diego was home to everyone’s favorite wacky children’s author, Ted Geisel – more frequently referred to as Dr. Seuss.
30. The children’s pool in La Jolla isn’t open for swimming due to an uncontrollable issue with seal poop.
31. The San Diego Zoo was also heavily shown in the 2004 Will Ferrell movie “Anchorman: The Legend Of Ron Burgundy.” However, the scenes were filmed at the old Los Angeles Zoo, not at the San Diego Zoo as depicted.
32. The San Diego Stadium opened in 1967 with a price tag of $27 million. It was renamed in 1981 after San Diego Union sports editor Jack Murphy.
33. The San Diego Padres began in 1969 when the Hollywood Stars came to represent the city in baseball.
34. Get your gears going. WD-40 was invented in San Diego by the Rocket Chemical Company in 1953.
35. San Diego County is home to the most missions in the country. You can view Mission San Diego de Alcala, Mission San Luis Rey, Mission San Antonio de Pala and Mission Santa Ysabel by taking the California Missions Trail.
36. Located in Balboa Park, San Diego’s Museum of Man is an anthropology museum which holds one of the most important collections of Ancient Egyptian antiques in the country including authentic mummies and seven painted wooden coffins – one of which is one of only six known to exist in the world as a rare Ptolemaic child’s coffin.
37. When the Colorado River broke out of a canal meat to carry irrigated water through the city, it poured into the dry Salton Basin seabed forming the Salton Sea sometime between 1905 and 1907.