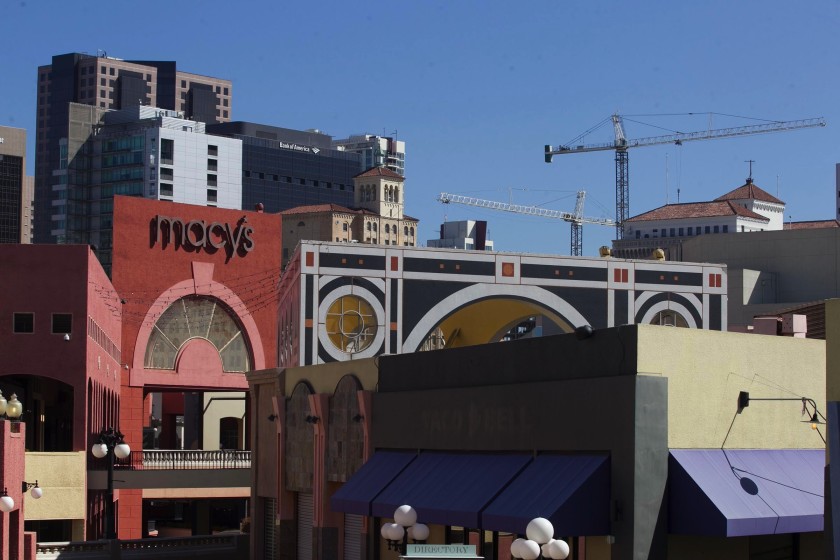 Horton Plaza’s second act as a $275 million mixed-use office campus is back on track as the mall owner has settled a legal dispute with long-time tenant Macy’s that threatened to kill the project.

The agreement, announced Thursday, brings to an end a three-month standoff over Stockdale Capital Partners’ plans to convert the mostly abandoned outdoor retail plaza into a mixed-use office campus, called “The Campus at Horton.” It also ends Macy’s tenure at the storied post-modern facility, as the retailer will close its doors in March following a going-out-of-business sale, Dan Michaels, managing director for Stockdale Capital Partners, said in a phone interview.

“This was the last major hurdle ahead of redevelopment and we are thankful to the community and the mayor for their support,” Michaels said.

In October, Macy’s West Stores, Inc. filed suit in San Diego Superior Court aiming to stop the project, arguing that the developer’s proposed non-retail uses were in violation of its lease and an even more substantial agreement that gave it veto power over property improvements.

Financial terms of the settlement were not disclosed. However, the Los Angeles-based firm, which acquired Horton Plaza in August 2018, noted that the legal agreement meant it could continue with its costly conversion of the downtown site and complete the project in 2021.

“The decision to close a store is always a difficult one, but Macy’s is grateful to have served the San Diego community over the past 35 years, and we look forward to continuing to do so at nearby Macy’s locations,” said Andrea Schwartz, who is a spokeswoman for the retailer. “Macy’s previously shared this information with our valued colleagues. Regular, non-seasonal colleagues who we are unable to place at nearby Macy’s stores will be eligible for severance, including outplacement resources.”

The campus project, approved by San Diego’s City Council in May, calls for a bulk of the 10-block property, or 772,000 square feet, to be remade into office space for tech firms and as many as 4,000 of their workers. Per the terms approved by the council, the developer will also lease, operate and redo the city’s Horton Plaza Park.

“We are making a long-term commitment to downtown San Diego and plan to quickly deliver The Campus at Horton as an urban hub for San Diegans to gather and a catalyst for thousands of high paying tech jobs, defining the future of downtown,” Stockdale Capital Partners Managing Partner Steven Yari said in a statement. “We are grateful for Mayor (Kevin) Faulconer’s leadership and the unified support from the community in moving The Campus at Horton forward.”

As noted in the statement, the real estate investment firm is crediting, in part, the efforts of local leaders who intervened on its behalf. Immediately following news of the suit, Faulconer sent a letter to Macy’s CEO Jeff Gennette, urging him to reconsider the retailer’s legal threat. Eight local leaders, including Assemblyman and mayoral candidate Todd Gloria (D-San Diego) and City Councilman Chris Ward, delivered a similar letter to the executive.

When it opened in 1985, Horton Plaza helped revitalize downtown San Diego and, according to historians, was the archetype of a successful American mall. The center’s newest owners hope for a similar impact, believing the project will act as a catalyst for job creation in the heart of the city.

Macy’s said a clearance sale will start on Sunday and continue through the end of March.