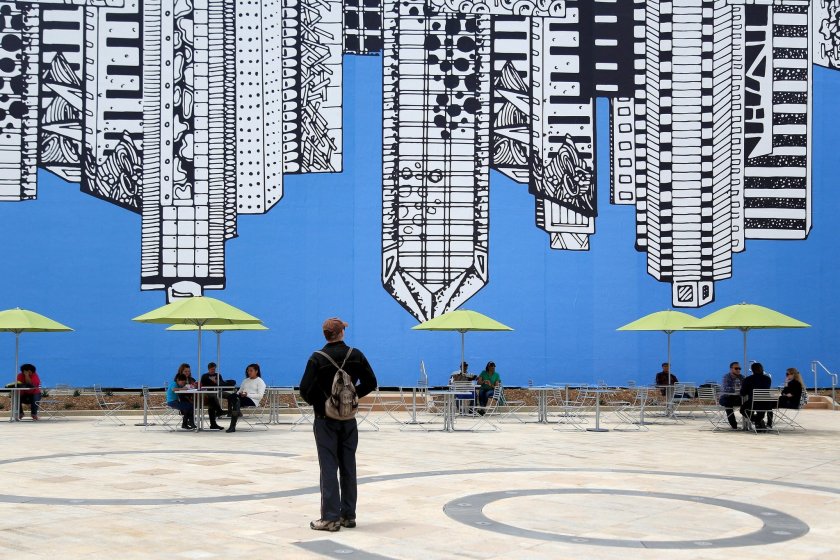 We are excited for Stockdale Partners to bring thousands of new, high-paying jobs by transforming Horton Plaza to The Campus by Horton for innovation and tech companies. We encourage the City to review and approve this project quickly to bring new life these to these cornerstone Downtown blocks.
– Amy Spear

City leaders are being asked to amend a deed restriction that currently requires most of the site be used for retail.

After six months in real estate limbo, Horton Plaza’s new proprietor will get the chance to seek the city’s buy-in on its ambitious plan to unlock the property’s perceived potential as a fancy office park.

Next Thursday, city staffers will present a draft term sheet, as negotiated with the developer, to the city’s four-person economic development committee. In its current state, the term sheet would allow the developer to reduce the required retail footprint by half in exchange for a number of commitments, such as paying for extra security at the adjacent Horton Plaza park (owned by the city) and renovating the Bradley Building for daily public use.

The thinking is that the city will benefit greatly through the change in use, given an ongoing shift in retail trends and demand for high-paying jobs downtown. The committee is being asked to provide feedback on the term sheet before the formal documents are drawn up and presented to City Council.

Opened in August 1985, Horton Plaza, in its heyday, was an internationally acclaimed attraction. It drew 25 million visitors in its first year and worked to revitalize San Diego’s then-troubled downtown. But recent years have seen the post-modern mall, which some believe should be designated a historic property, degenerate into a ghost town.

Stockdale Capital Partners last year purchased the 900,000 square-foot retail centerfrom then-owner Westfield for $175 million seeking to revive the urban plaza as an office campus for elite tech firms — adding as many as 4,000 new jobs in the process. The vision, dubbed “The Campus at Horton,” includes converting old storefronts into light-filled workplaces. It also designs to put millennial-friendly food, beverage and fitness concepts on the ground floor to entertain workers and visitors alike. The latest plan calls for around 772,000 square feet of commercial office space and at least 300,000 square feet of retail, according to a report prepared by city staffers.

The reuse project is expected to cost hundreds of millions of dollars and wrap up at the end of 2020.

First, though, Stockdale must secure the city’s blessing on a revision to the property’s grant deed. The deed and the intertwined Horton Plaza Owner Participation Agreement restrict permitted uses at Horton Plaza to include a minimum of 600,000 square feet of retail. The draft agreement going before the economic development committee next week would reduce the retail requirement by 50 percent or greater — requiring a minimum of 300,000 retail square feet to start and 200,000 square feet based on other conditions.

“This is a major determinate in moving forward,” said Dan Michaels, managing director for Stockdale, who added that his firm and the city are aligned in a desire to bring this “world-class project to bear.”

In return for the grant deed amendment, the city would require the real estate investment to fulfill obligations that include:

A bigger Nordstrom building: The structure formerly occupied by the department store at the southern edge of the site would get an additional four stories with 150,000 square feet of space.

An improved Bradley Building: Stockdale has agreed to design and redevelop the building, a 1985 recreation of a historic office building, for active commercial use and a better connection to the park. That means the firm would create a food hall, destination restaurant or something similar. It could also add a rooftop venue.

Enhanced security at Horton Plaza Park: If the city approves the grant deed change, Stockdale would have 30 days to employ a minimum of two security guards, 24 hours a day, every day of the year.

More density: The firm would also be on the hook for new construction that increases the floor area ratio, or FAR, of the site to 4, from 2.7 now. The floor area ratio is the relationship between the amount of usable floor area that a building has and the area of the lot, with a higher ratio associated with higher density.

An additional term, presumably of great interest to the city, is to secure a ground lease with Stockdale for Horton Plaza Park. The lease would allow the developer to rent the mall-adjacent site from the city and create a Bryant Park- or Union Square-like feel at the park. It would also require the firm to assume control over all park maintenance and operation duties. The exact details have yet to be hammered out, but the term sheet gives the parties six months to negotiate a lease agreement.

It’s a notable provision considering the city-owned asset sometimes resembles a homeless park, despite an $18 million makeover that opened in 2016 and promised to turn the outdoor plaza at Fourth Avenue and Broadway into a civic treasure.

The economic development and intergovernmental relations committee will hear from city staffers and Michaels next week on the deal. The group will consider the terms before they are presented to the full City Council at a yet-to-be-scheduled meeting. If approved by City Council, Stockdale could move forward with its conversion of the property from a retail center to a mixed-use technology campus without an environmental review.

“Our goal is to get hammers swinging as soon as possible,” Michaels said.

There is one potential legal obstacle. Jimbo’s Naturally, still a tenant at Horton Plaza, is suing the developer and may ask the court to halt the project should construction interfere with the grocer’s business.