For Nearly 100 Years, Voters Have Not Been That Into the Convention Center 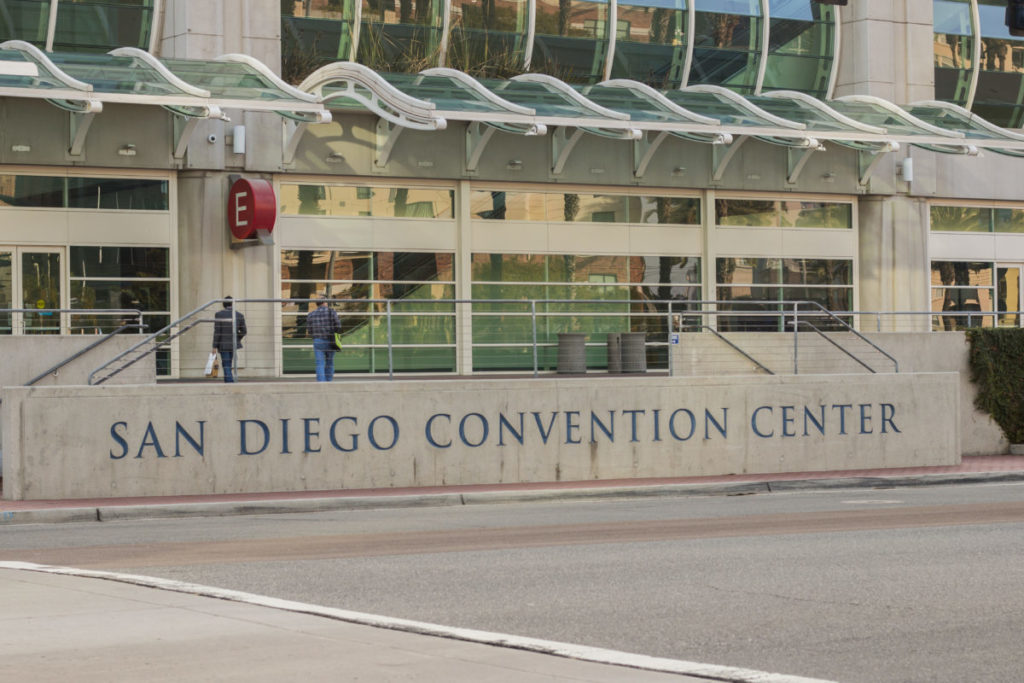 A measure to fund the expansion of San Diego’s waterfront convention center is headed to the ballot in 2020. Will voters say yes this time? History suggests the outlook is hazy at best.

San Diego voters have a well-deserved reputation for saying no to spending taxpayer money. (Sorry, Chargers!) But nothing beats their nearly century-long record of telling boosters where to stuff their plans for grand new public landmarks. Again and again, city voters have refused to pony up money to build things — especially convention centers.

Even compared with sagas of similar failures in other major cities, ours “is a particularly long and checkered story,” said Heywood Sanders, a professor of public administration at the University of Texas at San Antonio and the leading critic of taxpayer spending on convention centers.

Now, after a failed bid to get it before voters last fall, a multibillion-dollar expansion of San Diego’s waterfront convention center is headed to the ballot in 2020. Will voters say yes this time? History suggests the outlook is hazy at best, even though voters would be hiking taxes on hotel guests instead of themselves.

Here and elsewhere, “when given the opportunity, the public will often say no,” Sanders said. “These are a tough sell to the voters.”

How tough? According to research by Sanders, San Diego voters turned down spending on convention center projects in 1946, twice in 1956 and in 1981.

Earlier, San Diegans in the Depression-era 1930s threw cold seawater on the idea of spending money on any building by voting against a waterfront city-county civic center three times. Only federal money spearheaded by President Franklin Roosevelt turned a city-county civic center into the reality we now know as the landmark, art-deco and extremely pink County Administration Center.

All these no votes in the 1930s, 1940s and 1950s burst the dreams of local officials who wanted to bust San Diego out of the reputation it had developed over the previous few decades as a sunny but sleepy town. (Previously, in the 19th century, we were known as a sunny but sinful town full of “theft, murder, incendiarism, carousals, fights, highway robbery and licentiousness,” as a 1892 history put it, but that’s another story.)

City Leaders Push Voters Out of the Loop

From the perspective of voters, San Diego’s 20th century dullness was a feature, not a bug, and we didn’t seem to want to spend money to gussy up the joint by building convention centers and bringing in more tourists.

By the 1960s, Sanders said, other cities were also having trouble persuading voters to pay for public projects like convention centers. “It’s not necessarily clear to the public that a new or expanded convention center is really worth it to them, that it will produce some serious community benefit,” he said. Meanwhile, “minority voters were increasingly empowered [in the 1960s], and it became more difficult to gain support.”

But businesspeople such as hotel and restaurant owners love convention centers, and they have a lot of influence over the people in charge. So elected officials across the nation conjured alternate plans that would leave skeptical voters out of the loop even though their money was being spent. As a result, “by and large, cities sought to shift from putting these things on the ballot for a public vote to coming up with a way to finance them outside the public vote and approval process,” Sanders said.

That’s just what happened here. Over the last few decades, San Diego city and business leaders sought time and time again to get the public to pay for convention center construction without bothering to ask the public. But this approach hasn’t always worked.

We Woo the GOP But Not to Our Convention Center

In the early 1960s, as Sanders wrote in a study published in 1992, the city built the Golden Hall convention center through an arrangement that involved money from the city employee pension fund, municipal funds devoted to construction and more than $1.6 million in donations from the business community.

Golden Hall was shoved aside, however, when the Republican Party decided to bring its 1972 National Convention to town. The plan was to hold the convention at the Sports Arena, despite various challenges like the inability of its ventilation system to handle all the cigar and cigarette smoke from politicians and media types.

Conventioneers never got a chance to choke on bad air by the bay. A pre-Watergate political scandal killed off plans for the GOP convention here, to the relief of locals who worried about protesters rioting in the streets, and a doomed President Richard Nixon was nominated in Miami Beach instead.

In 1981, San Diego’s powers-that-be — including then-Mayor Pete Wilson, a future senator and governor — tried to build a convention center in the middle of downtown near Horton Plaza. They planned to pay for a loan with city funds, and they said taxes paid by hotel visitors would help pay it back. But a petition drive forced the project to a public vote, and voters punted it.

The port district built the current convention center, which opened in 1989 and most famously played host to the 1996 Republican National Convention. The port tapped into city money to help pay for a 2001 expansion. The convention center has been trying to expand itself even more for well over a decade as it faces pressure from big conventions like Comic-Con, but it’s run into several hurdles.

Amid a National Glut, Expansion Hits the Skids

Mayor Kevin Faulconer has made a convention center expansion a showpiece of his time in office. But a petition drive failed to force the issue immediately onto the ballot last year, although enough signatures were gathered to require a measure at the next general election. Faulconer decided against calling an expensive special election this year, so that means yet another delay. In 2020, San Diego voters will consider a ballot measure that ties an expansion to funding for homelessness assistance and road repairs.

“They,” he said, “are very difficult things to kill off.”