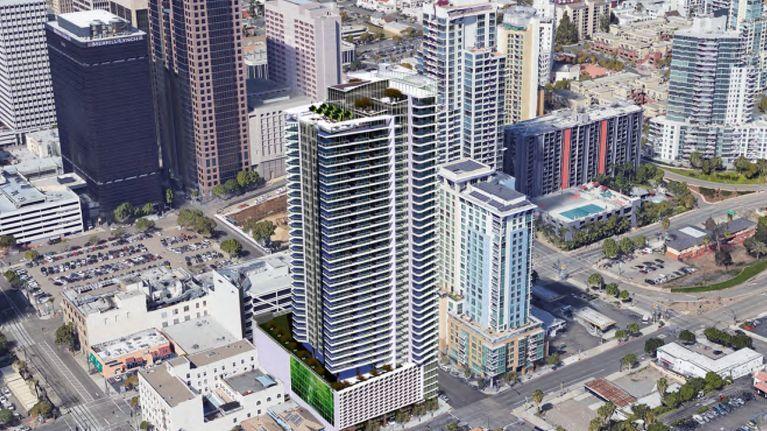 First look: Proposed East Village skyscraper would be one of city’s tallest

One part of downtown seems to be racing toward the sky.

Developer Liberty National Corp., based in San Diego, is proposing a 40-story, 414 feet tall residential high-rise to join a cluster of the city’s tallest buildings near the northern fringes of East Village.

The apartment tower, with 415 units and 7,610 square feet of commercial space, would be on the south side of B Street between 10th and 11th avenues. If approved, it would be the 15th or 16th tallest building in the city, depending on when it opens.

Downtown planning agency Civic San Diego’s design review committee got their first look Wednesday at the project, which gave it favorable reviews. It will be another two to three months before the project returns to the design committee with changes, and then eventually to the full board for approval.

Committee member Jennifer Ayala said she appreciated how well the building appeared to fit in the neighborhood.

“It has a blend of residential and business feeling,” she said, “and that location could use a building that transitions well.”

The developer is proposing to not include low-income housing on site, instead paying $3.4 million in inclusionary housing fees. While it could become an issue when the full board reviews the project, it does have something that Civic San Diego has struggled to get recently — density.

The 11th and B project would maximize a half block site, about 30,000 square feet, in an area where planners are trying to jam in more housing. Some developers are deciding to build smaller projects on sites that could have substantially added to downtown’s housing supply.

Developer JPI in September proposed a 318-apartment project on a full block site in East Village that could have held up to 900 apartments. Civic San Diego ended up approving the project when JPI added 50 more apartments.

While there is pressure locally to reduce parking requirements, Liberty National is planning 582 parking spots at the 11th and B project with three floors below ground and six levels above.

“I’m an advocate for the market determining how much parking you should have,” committee member Theodore Shaw said, “but you are way over.”

The building would join a four-block cluster of buildings on B Street that are some of San Diego’s tallest. Buildings nearby include Vantage Pointe Apartments at 420 feet, The Rey apartments at 304 feet and Symphony Towers at 499 feet. A few blocks away, a 490 foot apartment building from Bosa Development on Broadway is under construction. 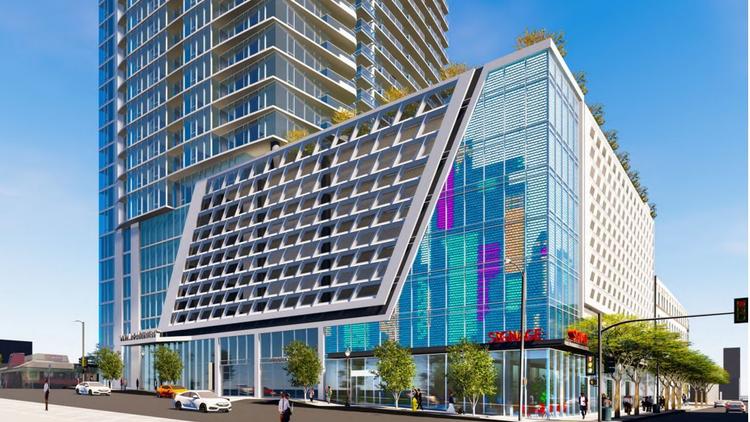 The apartment complex would have 415 units. (Civic San Diego)

The building was designed by CallisonRTKL of Baltimore. Some of their past projects include the AT&T San Francisco flagship store, London Jewelers in New York City, UC San Diego hospital expansion in La Jolla, PetCoach in San Marcos and Figueroa Centre in Los Angeles.

Robert Lisauskas, senior associate vice president with CallisonRTKL, told the the design committee that it worked hard to design a building that would fit in well with the community and open up public areas on and near the streets.

“We love these types of projects because it allows us to really take a vacant property and create complete streets,” he said, “with active zones and a pedestrian environment.”

The ownership structure of the 11th and B project is somewhat unclear. The corporate officer listed is Mark Schmidt, principal of Willmark Communities. The phone number and address given to Civic San Diego is the same as for Willmark, but the business name used for the project is Liberty National Corp.

In July, Willmark paid a $4.75 million dollar settlement to a group of tenants that alleged the company had a practice of unlawfully retaining security deposits of tenants, or levying bogus charges when tenants moved out. Willmark denied any wrongdoing.

Estimates say the 11th and B project will create 346 construction jobs and 40 permanent jobs. 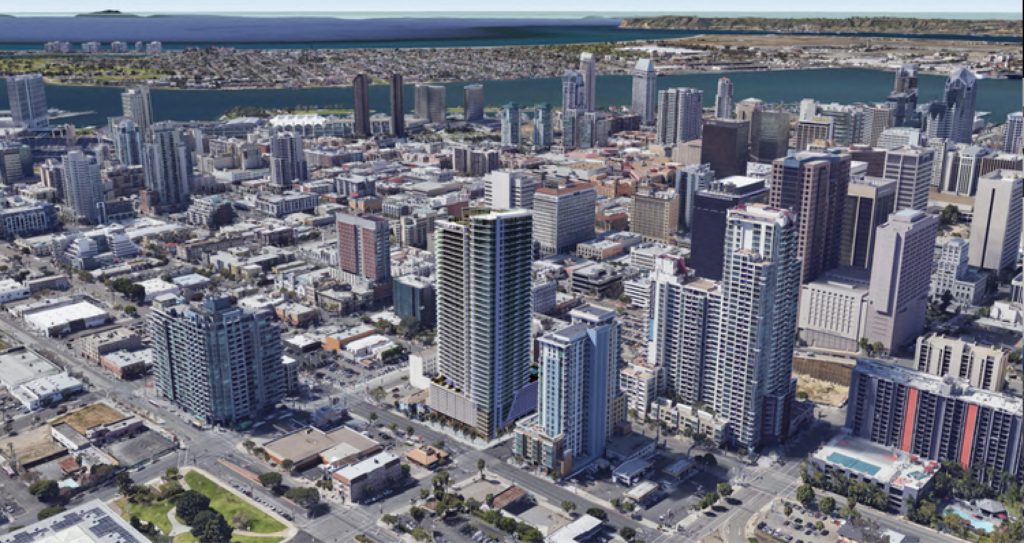