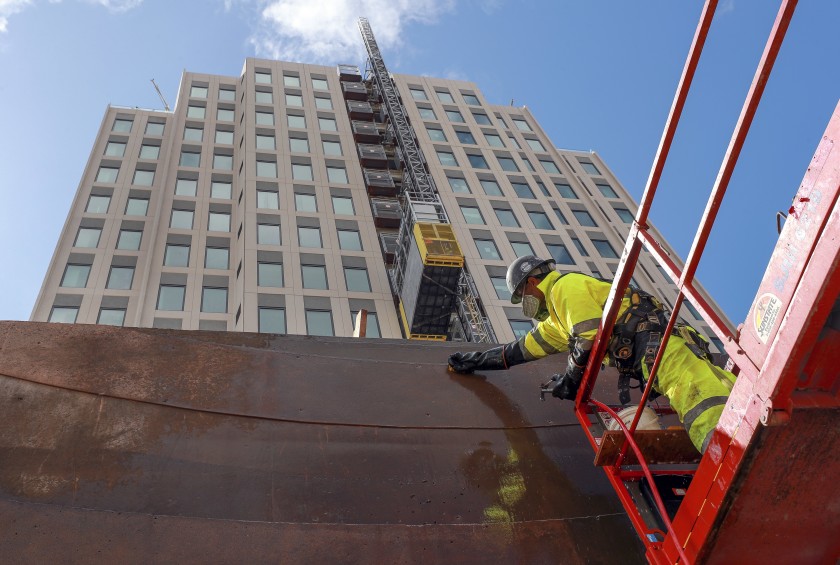 Even in a pandemic, building is still booming in San Diego — for now

The local construction industry is chugging along at a remarkable pace despite complications of performing state-deemed “essential” work during a global pandemic.

Developers erecting some of San Diego’s most significant structures remain cautiously optimistic about in-progress project timelines, while simultaneously acknowledging that a cloud of uncertainty hovers ominously above anything in the pipeline that isn’t fully funded or permitted.

This coverage of the coronavirus pandemic is part of your subscription to The San Diego Union-Tribune. We also provide free coverage as a service to our community.

In other words, the future is bright so long as you don’t look too far out on the horizon — or at other states with more extreme policies.

“In San Diego, largely all of our construction sites are still open,” said Carol Kim, who is the political director for the San Diego County Building and Construction Trades Council. The council represents 22 unions and more than 30,000 workers in the region. “We had a couple of shutdowns early on, but after the guidance came out saying that construction is allowed to continue, most of those have reopened.”

That’s not to say developers and their general contractors are sidestepping what may have seemed like radical decisions just weeks ago.

For instance, an 800-person crew is reporting daily to the UC San Diego job site, operated by Clark Construction, where the school is putting up its largest complex in campus history, the $627 million North Torrey Pines Living and Learning Neighborhood. It is the centerpiece of a $1.6 billion campus expansion project. The laborers have now been assigned to staggered shifts to minimize the spread of the novel coronavirus, Kim said. 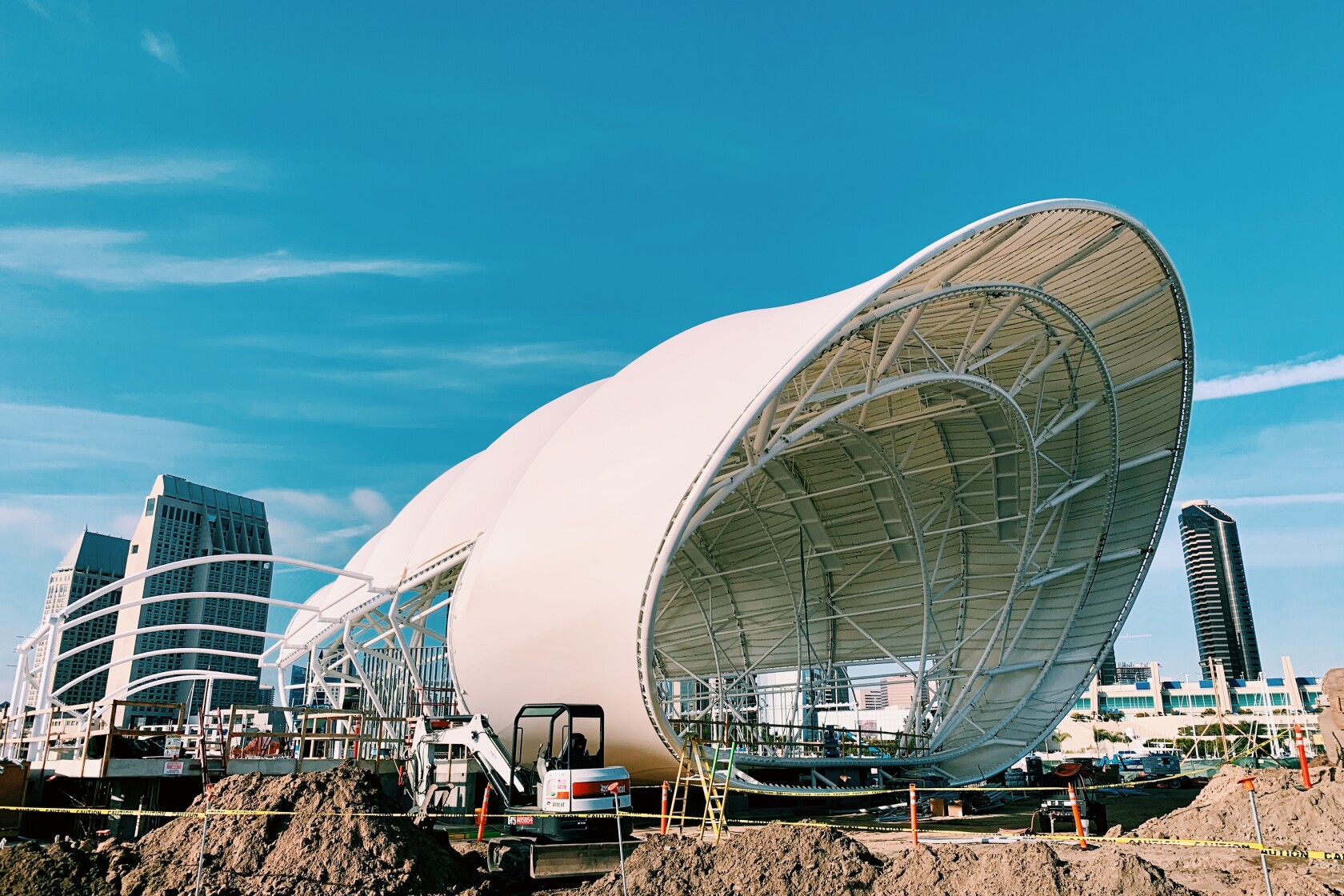 San Diego Symphony’s annual outdoor concert series is still on track to debut at The Shell this summer, with roughly 80 workers reporting for duty.

The $45 million project includes a 13,015-square-foot outdoor stage, acoustic shell and back-of-house facilities for a year-round version of the Bayside Summer Nights program. It also features a 5,445-square-foot public viewing deck with concrete steps at the back of the stage, a 68-stall restroom and two pavilions on a 15,242-square-foot area. The 17-story downtown office building that will serve as the headquarters for U.S. Navy is nearing completion, said project manager Perry Dealy.

General contractor Turner Construction is overseeing the job site, located between Pacific Highway and Harbor Drive, and south of Broadway.

To date, the COVID-19 pandemic has had no impact on the project’s crew, which hovers at around 200 people a day.

Save for the parking garage, the building’s outside is done, and interior work is in progress, Dealy said. That means, barring an unforeseen interruption, the Navy should be able to get its certificate of occupancy in November.  (Hayne Palmour IV, The San Diego Union-Tribune) 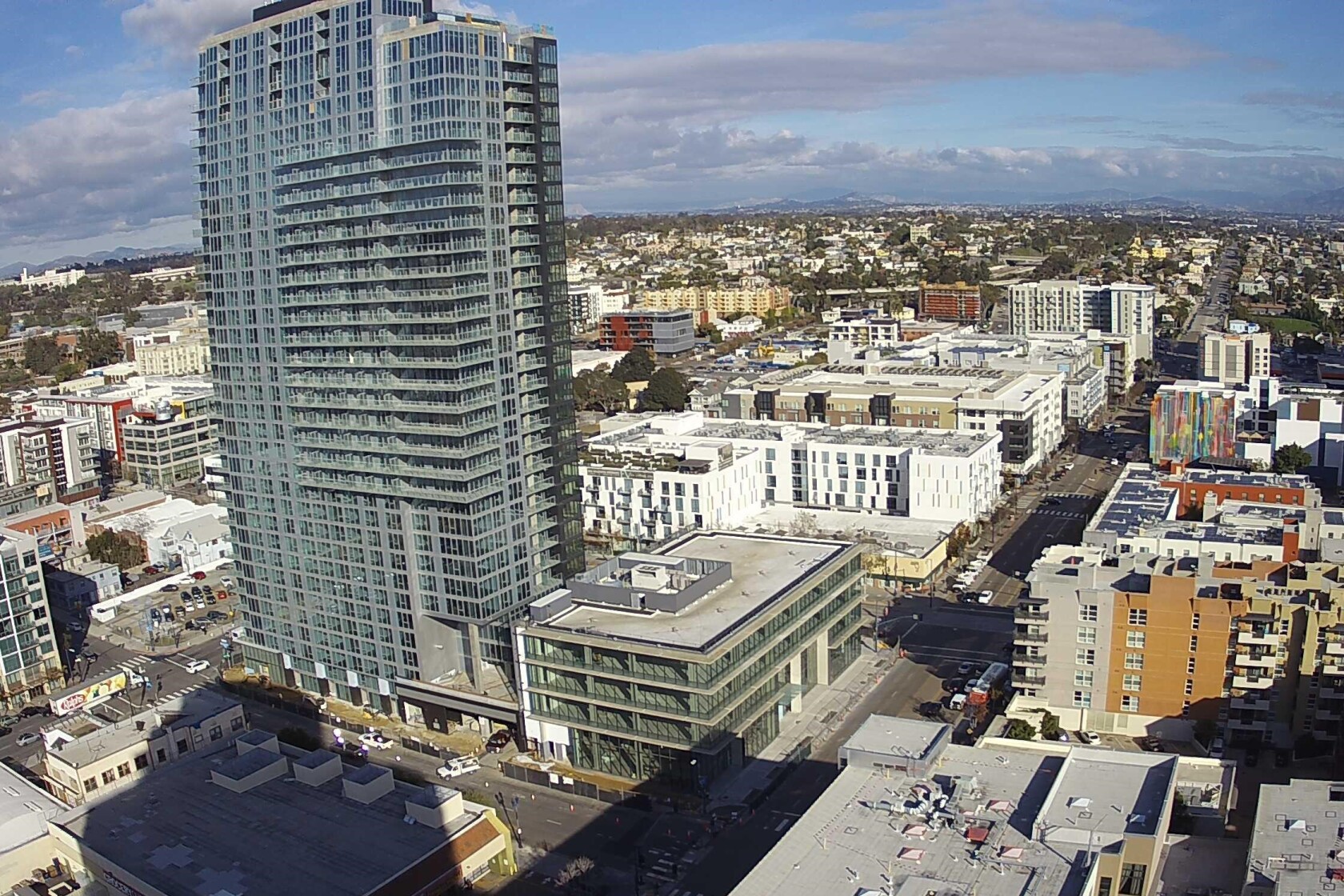 Developed by Holland Partner Group, the Park & Market project will include 427 apartments, 86 of which will be reserved for low-income workers.

Attached to the 34-story tower is a four-story office and classroom space for UCSD.

The UCSD portion of the building is complete, said Tom Warren, an executive with the Vancouver, Washington-based developer. And the firm expects to obtain its temporary certificate of occupancy in June.

“We’re fortunate that we’re far enough along that this project hasn’t been impacted by any material shortages or supply chain impacts,” Warren said. “It’s almost done.”

The personnel count at the property varies day-to-day, with attendance in excess of 80 percent of the amount Holland would have expected prior to the emergence of the coronavirus in the U.S.  (Courtesy, Holland Construction) 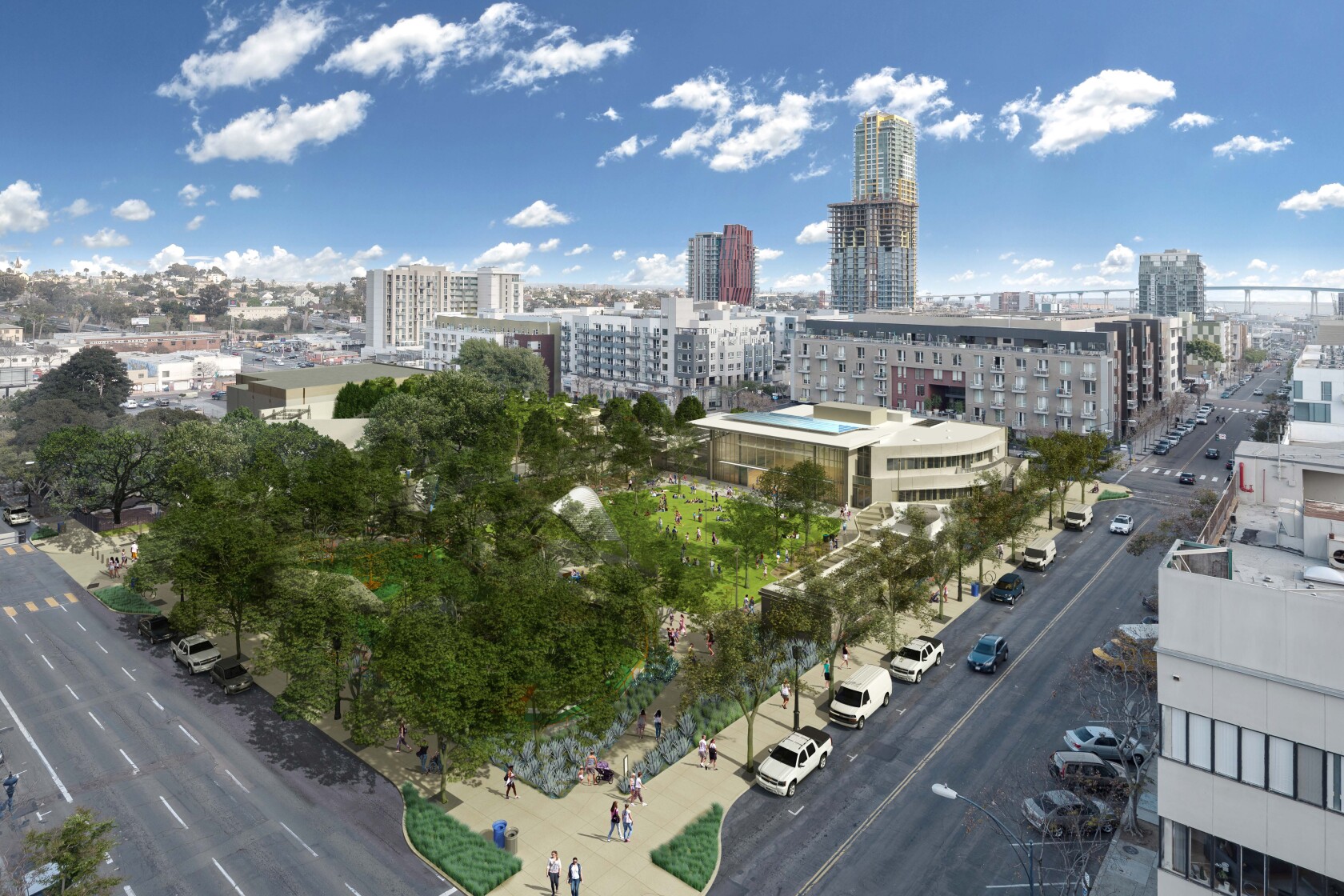 With East Village Green, downtown San Diego’s fast-growing residential population should by the summer of 2022 have access to a two-acre, $52.3 million city park.

Despite a just-announced city budget crisis, there are no changes to the park’s development schedule, said Brad Richter, who is deputy director of the city’s urban division. That means the city still expects to progress with a competitive bidding process this spring and break ground in the summer. 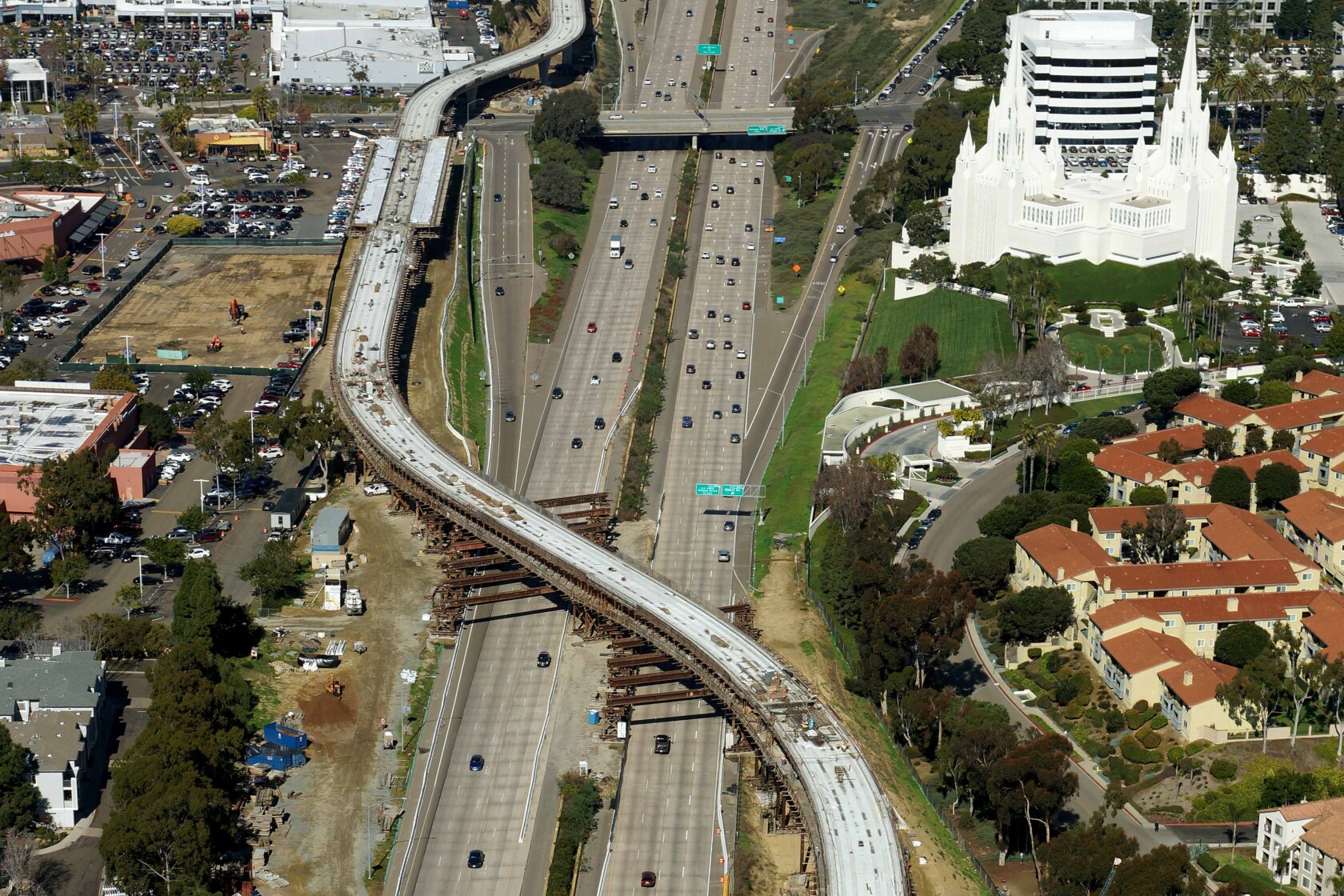 Construction on the Mid-Coast Trolley extension from downtown to University City continues to remain on schedule, and there are not currently any changes to the project timeline, a spokeswoman for the San Diego Association of Governments said.

Mid-Coast Transit Constructors (MCTC) is a joint venture firm of Stacy & Witbeck, Inc., Skanska USA, and Herzog Contracting Corporation. And the number of working crew members has not been impacted the pandemic, the spokesperson said.

There have been changes to working conditions, however. For instance, field engineers work from their trucks when on-site, office staff are working remotely, social distancing practices are being enforced and staff must remain home at the sign of any coronavirus symptoms.   (Courtesy, SANDAG)

Smaller but arguably equally consequential projects are also sprinting toward their completion dates later this year.

The San Diego Symphony’s $45 million bayside performance venue, known as The Shell, is on target to open this summer, as originally planned, said Martha Gilmer, who is the symphony’s chief executive officer. The year-round entertainment venue, already visible at downtown’s Embarcadero Marina Park South, is about 45 percent complete, she said.

“This site is just a gift for the city. It’s probably one of the most unique projects anywhere,” Gilmer said. “When I used to be able to go out there on a regular basis, I could feel the passion and the care that every one of those workers feels for being to able to work on that site and create this beautiful venue.”

The project’s workers — there are around 80 on any given day — are following enhanced safety procedures. Scheduled work is now subject to new distancing protocols designed to eliminate crowding, all meetings are conducted in the open air, trailers are closed to workers and hand-washing stations have been installed throughout the site, Gilmer said.

The practices are consistent with those encouraged by the Building and Construction Trades Council, which is actively monitoring job sites for compliance. Although some general contractors are doing a better job than others.

“We are really pushing to make sure that the contractors who are overseeing work sites are implementing safety precautions. We are still hearing that some of them … are slow to get that stuff done,” Kim said. “We are keeping a close eye on that and are pushing for more hand-washing stations, more disinfecting cleaning supplies and better distancing. Because those things are not usual on construction sites.”

But these people who are working to ensure that San Diego’s booming development industry doesn’t come to a local economy-killing standstill are, for one reason or another, in a precarious position.

“It’s hard to know what’s going to happen with construction workers,” said Daniel Enemark, who is a senior economist at the San Diego Workforce Partnership.

Enemark authored a report this week identifying 15 county occupations that are most likely to be hard-hit by the COVID-19 pandemic, with construction laborers making the list. Construction work, however, is a bit of an outlier. Immediate layoffs aren’t the issue, he said. At the same time, these aren’t work-from-home positions either.

“The thing about construction is that it falls into this really interesting third category, which is the actual health effects of coronavirus. If we don’t adjust properly, a lot of people are going to get sick,” Enemark said. “And if people aren’t able to come into work in the construction field, there could be labor shortages.”

Of course, today’s plentiful construction job climate ignores a looming reality. Most economic experts, Enemark included, believe we’ve entered a recession. It’s not official. Economists need to document two quarters or more of negative economic growth before they can apply the unsettling label. But it seems like an inevitable declaration with an unprecedented number of workers applying for unemployment benefits.

And that’s bad news for the building business.

“I think whenever there’s an economic downtown there’s always going to be challenges getting financing for construction,” Kim, the building and trades council political director, said.

“(The Great Recession) hit the construction industry incredibly hard because all of the private work dried up almost overnight. In various parts of the country, you saw buildings that were half-built … just stop and go dark,” Kim added. “These are things that can happen, and with the market tanking right now, we are definitely nervous about that.”

Even with ample funding, many commercial and residential construction projects in the state of Washington have been suspended following the March 25 directive from Gov. Jay Inslee clarifying rules of his earlier stay-at-home proclamation.

It’s an unsettling reality for Holland Partner Group, a real estate developer based in Vancouver, Washington that has been directly impacted by the directive. In San Diego, however, the developer is making good progress on its landmark Park & Market apartment tower in East Village, where UCSD will also occupy 62,000 square feet of office and classroom space.

“I think it’s critical to move forward with construction where we can,” said Tom Warren, who is the firm’s Southern California executive managing director.

Despite a small reduction to the Park & Market workforce in recent weeks, the tower is still slated to receive its temporary certificate of occupancy in June.