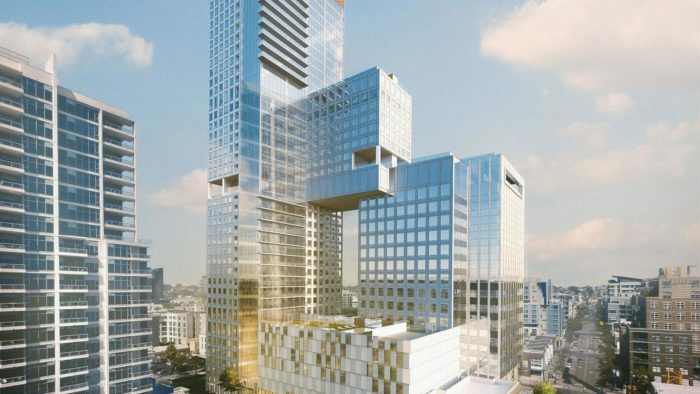 We are thrilled that the 7th & Market project with the Ritz Carlton project is finally moving forward! Thank you Cisterra for your diligence and vision to bring such a classy and wonderful project to Downtown.

Long delayed plans to build San Diego’s first Ritz Carlton in downtown San Diego are back on track after a legal challenge targeting the project was dropped this week.

The developer, San Diego-based Cisterra, says it now plans to start construction by the middle of next year once financing is lined up for the $450 million project, which will also include new office space and for-sale and rental housing. Construction is expected to take three years, says Cisterra.

Although the project, proposed for the corner of Seventh Avenue and Market Street, was approved in 2016, a subsequent lawsuit challenging the approval on environmental grounds put the entire development on hold.

Filing the suit was hotel union member Sergio Gonzalez and San Diegans for Responsible Planning, a coalition of community and union members living and working in San Diego. A lower court last year rejected their legal challenge but the ruling was appealed.

Gonzalez and San Diegans for Responsible Planning have since reached a confidential settlement with Cisterra and agreed this week to dismiss their appeal, their attorney, Gideon Kracov, said.

All parties, he added agreed to keep the details of “that cooperative relationship” confidential.

While Kracov’s lawsuit never raised the issue of union jobs in connection with the project, Unite Here Local 30, which represents hotel workers, had previously pressed Cisterra and its tenants for a commitment to offer well-paying union jobs.

The agreement to dismiss the lawsuit also applies to a second project that Kracov’s clients had challenged — a 20-story, 324-room hotel planned a block away at 7th and Island Avenue. Both the city of San Diego and Civic San Diego, the city’s downtown planning agency, were the defendants named in the complaint.

Whole Foods, which had signed on to the project early on, backed out earlier this year because of the ongoing delays caused by the litigation. Cisterra Project Principal Jason Wood said there will still be an upscale gourmet grocer in the project but he cannot yet disclose who that will be.

One of the top priorities now is securing financing, Wood said. Possible sources include include lenders as well as equity providers. Cisterra previously had a financing commitment but that dissolved amid the litigation delays.

Wood said he is not concerned about potential competition as more housing, offices and hotels continue to be developed downtown.

“I think our location is the best in San Diego, right between the ballpark and the Gaslamp Quarter, and you have the views of the ballpark and bay,” Wood said. “And you can say you’re in the Ritz building with a gourmet grocer.”