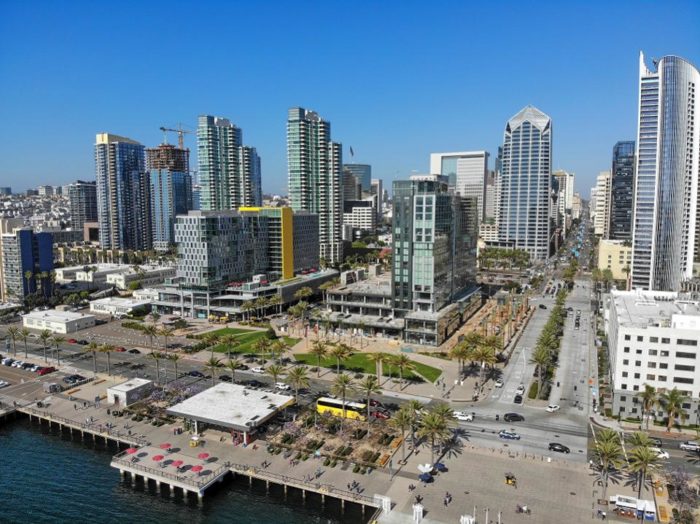 A 42-story apartment tower could take the place of downtown’s former library building on E Street.

Civic San Diego, downtown’s planning agency, recommended Wednesday that the City Council enter into an exclusive negotiating agreement with Canadian-based Bosa Development to develop the site for a mixed-use project.

Bosa’s initial plans call for 392 rental apartments (including 30 subsidized units for low-income renters), restoring the historic facade of the building and reserving 8,800-square-feet on the ground floor for commercial uses.

“It’s going to be a high-quality development with high-quality materials,” Paul Lamme, senior development manager at Bosa, told the board. “We will be preserving the historic aspect of this.”

After Wednesday’s action, the project goes to the City Council for consideration in October or November.

The estimated schedule calls for City Council approval by November, completed negotiations to buy the city-owned site by June, and construction to begin sometime in 2020 or 2021.

Board members were in favor of the project largely because it increases housing and includes subsidized apartments. However, director Stephen Russell strongly opposed the project on grounds it did not preserve the history of the library, built in 1954, even though he is a strong advocate for more housing.

He noted that plans for the 420-foot tall building included construction of three floors of underground parking and four above ground, which would mean little left of the library besides the facade.

“For that parking to go in as proposed, it really requires hollowing out this particular civic asset and building on top of it,” Russell said, “Once that is hollowed out, we don’t get it back.”

Civic San Diego only received two complete proposals for the site. The second came from Dallas-based Lincoln Property Company, which called for rehabilitating the building mainly for office space and a public museum for the library in the lobby.

The three-story proposal from Lincoln was rejected by the board because of several high-profile office projects already slated for downtown, including at Horton Plaza, and the need for more housing. Also, the Bosa project is expected to return more money to the city. A study by the agency projected revenue to the city of $32.3 million from Bosa over 30 years compared to $21.1 million from Lincoln.

“The site has been sitting there not utilized and given the fact we are in a housing crisis, I am supportive of the (Bosa) approval moving forward,” said director Paola Avila.

Other board members expressed reservation over the initial design shown by Bosa, saying there would be an opportunity in the future to discuss changes before approval. In the end, the vote was 6-1 with only Russell voting against the Bosa proposal.

The city left the 75,000-square-foot library building at 820 E St. in September 2013 when it moved to the new Central Library on Park Boulevard across from Petco Park. The first effort to get proposals for the site, focused on technology and innovation uses, received only underwhelming responses, said Civic San Diego staff.

In late 2017, the agency instead issued new proposals that were more broad and allowed for a sale of the land, instead of a lease.

If given final approval, the Bosa tower above the library will be nearly across the street from another tower it is constructing. The roughly 490-foot tall apartment tower on Broadway will be the tallest residential building in San Diego County history.

It was a busy meeting for Civic San Diego, with other projects and actions approved:

Fifth & Ash Suites: A 16-story hotel in Cortez Hill from San Diego-based Narven Enterprises on the site of a former parking lot got unanimous support from the board. It is now approved to begin construction, unless it is appealed, and would then go to the San Diego Planning Commission. The developer said after the meeting that construction would probably start in a year and then take two years to complete.

Plans for the hotel call for 156 rooms and a roof deck with a bar, lounge and pool. Cristoph Fassler, senior architect at Joseph Wong Design Associates, said the design of the building would fit in well with surrounding buildings.

“It’s a very dynamic and unpretentious design,” he said. “It’s not trying to be eye candy. It’s a nice, simple building we feel fits within the neighborhood.”

Third and A Street: A 21-story mixed-use tower from Houston-based The Hanover Company was unanimously approved by the board. Like Fifth & Ash Suites, it now has final approval unless appealed to the San Diego Planning Commission. The developer said construction could begin in March and would take roughly two years to complete.

The Cortez Hill building calls for 270 apartments, 4,000-square-feet of retail on the ground floor and 280 parking spots spread out over three underground levels and three floors above ground. The architect is Carrier Johnson + Culture.