State bill would largely bar the short-term rental of second homes and investor properties within the county’s coastal zone where cities already have widely varying regulations.

In yet another victory for critics of short-term vacation rentals, a state Senate committee on Tuesday advanced a bill that would sharply curtail such rentals in San Diego County’s coastal communities.

The 7-2 vote by the Senate’s Judiciary Committee keeps the controversial bill alive as it moves on to two more Senate committees, which would need to support the legislation before it could advance to the full legislative body. Authored by Democratic Assemblywoman Tasha Boerner Horvath of Encinitas, AB 1731 already cleared the state Assembly last month, with San Diego’s delegation divided on the bill.

Should the bill make it through the legislative process, its passage could dramatically alter the short-term rental industry in the county’s coastal cities that either loosely regulate such rentals or, as in the city of San Diego, have no rules governing who can and cannot rent out their properties for stays shorter than 30 days.

“I’ve used Airbnb in San Diego and really enjoyed it, but I also see that a lot of folks are buying up property as an investment and renting it out and removing (long-term) rental stock from the marketplace,” said state Sen. Hannah-Beth Jackson (D-Santa Barbara), who chairs the Judiciary Committee. “I’m torn on this. I think reasonable minds can differ on this. It’s a tool in a toolbox where we have such a housing shortage.”

State Sen. Brian Jones (R-Santee), who joined fellow Republican Andreas Borgeas of Fresno in voting no, said that while he shared a lot of Boerner Horvath’s concerns, said, “I just can’t get there today.” 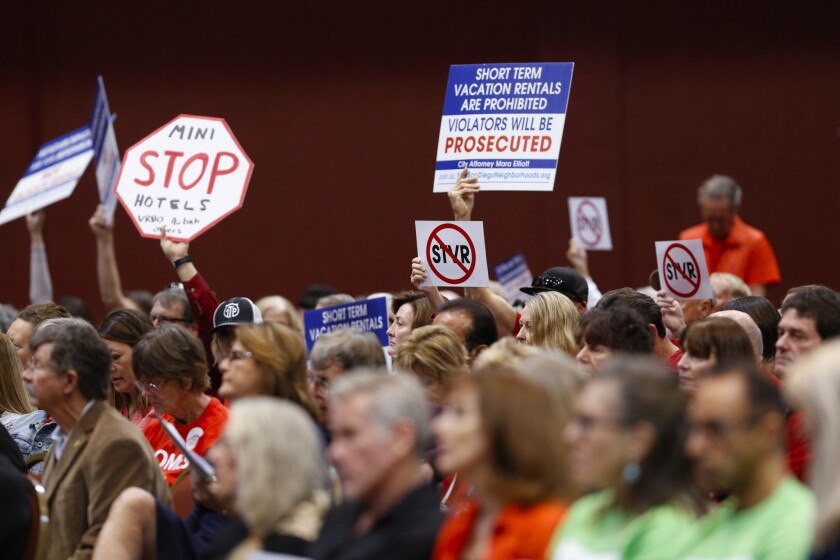 Strongly opposed by the home-sharing industry, the bill specifically targets short-term rental platforms like Airbnb, VRBO and HomeAway by not allowing them to list — and book — residential properties for more than 30 days a year each unless the full-time resident is present. Year-round rentals would be permitted for traditional home-sharing in which residents rent out a spare bedroom or a granny flat on their property. The legislation would have the effect of largely barring the short-term rental of second homes and investor properties listed on the home sharing platforms.

While the bill was originally conceived to apply to all of California’s coastal areas, Boerner Horvath later changed the legislation to cover just San Diego County’s coastal zone, where cities from Coronado to Carlsbad have widely varying regulations, from outright bans to more permissive rules. The bill would allow cities to enact or retain regulations that are more restrictive than her bill.

Driving her legislation, says Boerner Horvath, is the impact she believes short-term rentals are having in depleting the supply of longer term rental housing. She and other critics of vacation rentals argue that the platforms create a financial incentive for renting out properties for short-term stays instead of long-term residential use, thus reducing the housing supply and driving up prices.

“We all know too well that California is in the midst of a statewide housing crisis,” Boerner Horvath told the committee. “We think there are approximately 5,000 short-term rentals operating full time in San Diego’s coastal zone. Would we allow the de facto demolition of 5,000 housing units without replacing them?”

Her bill, she said, is “narrowly tailored to regulate short-term rental platforms. They are the ones causing this massive market disruption.”

Among those backing the bill are the California hotel industry, which has long been critical of short-term rentals, and organized labor.

AB 1731 was crafted as a pilot program that was to originally expire after five years, but Boerner Horvath has now agreed to shorten that period to three years, after which a study could be conducted to determine whether the tighter controls had any meaningful impact on stemming the loss of coastal housing and could possibly be extended to other parts of the state.

“This is a huge issue in my district,” said Sen. Bill Monning (D-Carmel). “The fact that this would be a pilot program could educate others in other parts of the state. There is no easy solution to this. Letting it go unregulated I don’t think is the answer. I’ll be watching to learn lessons that can hopefully inform us in other parts of the state.”

Airbnb lobbyist John Ross told the committee that the regulation of vacation rentals should be left to the local jurisdictions, not state legislators.

“This bill bans the rental of vacation homes in San Diego,” he added. “If you’re not a primary resident this bill does not let you use a hosting platform to rent your home. It preempts the ability of local governments to implement thresholds they think are more appropriate.”

In an analysis provided for the Judiciary Committee, questions were raised about how the bill’s provisions could be enforced. The analysis notes that the home sharing platforms would not likely monitor or verify whether property owners and tenants are complying, adding that nothing in the bill requires them to do so.

It is very possible that the AB 1731 could be amended further as it proceeds through the legislative process. The Senate’s Natural Resources and Water Committee will consider the bill next, followed by the Governance and Finance Committee.