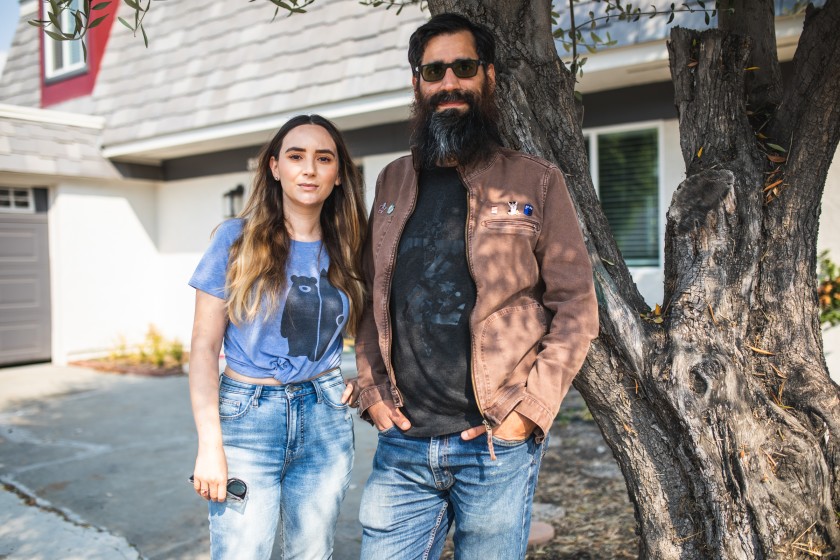 San Francisco is seeing many tech workers leave for cheaper places. San Diego is on the list.

San Francisco is so expensive that San Diego seems like a bargain.

Bay Area couple Eduardo Guillen, 40, and Jessica Fender, 35, found that out the hard way, moving away from San Diego five years ago to fight it out in America’s most expensive rental and housing market. They both got high-paying tech jobs but knew homeownership wasn’t a possibility.

With a median home price in San Francisco of $1.4 million, the well paid married couple did what many in their situation did: Became renters.

Then, COVID-19 hit. Fender, a graphic designer, was told to work from home and Guillen, a user design expert, left his office. Both were stuck in their Richmond rental working in close quarters 40 hours a week.

After a few months they asked their employers if they could move to San Diego and continue to work remotely. Their bosses agreed, and the couple suddenly found themselves able to afford a home. They bought a five-bedroom house for roughly $642,000 in Chula Vista and are thrilled with the purchase.

“San Diego is still kind of expensive, but it is not as expensive as the Bay Area,” Fender said.

San Francisco tech workers leaving for cheaper locations has been a national news story for months as companies like Twitter and Facebook add telecommuting options during the pandemic. Zillow reported last week that the number of homes for sale in San Francisco was up by 96 percent from the same time last year. That is at a time when inventory is dropping across the nation, especially in San Diego.

Google doesn’t have a plan for workers to return until next summer, and smaller Bay Area tech companies — like the ones that Guillen and Fender work for — are pushing back plans to return to the office.

See how the Mazda CX-30 measures up to the competition and explore model packages.

It’s not fair to say Guillen and Fender only moved to Chula Vista because it is cheaper. Their family is spread out between San Diego and Tijuana, and they wanted to be closer to them. Still, both said they wouldn’t have been able to afford any home in the Bay Area, let alone one with five bedrooms.

Guillen said low mortgage rates were a factor in buying the Chula Vista home as well as the area’s lower cost of living compared to the Bay Area.

“Things like gas, utilities and stuff like that are way less expensive. Groceries, for sure,” he said of San Diego. “It all starts adding up.”

The real estate agent who worked with the couple to buy their home said people moving from San Francisco is not a big part of his business but expects it could be as working from home continues to grow. Gary Kent, a La Jolla-based agent, said San Francisco and San Diego are both beautiful places but San Diego stands out for better weather and less expensive homes.

“We think San Diego prices are so high,” he said, “but people from the Bay Area come down and it’s like going to a dollar store. Like, these are bargains.”

The Bay Area’s loss may be San Diego’s gain. Local businesses have said for years that they have struggled to get high-skilled tech workers to the city. The San Diego Regional Economic Development Corp. has a program, SanDiegoLifeChanging.org, to entice workers to move to the area.

Meanwhile, several big tech companies have been increasing their presence in the region. Seattle-based Amazon announced last week it was adding 40,000 square feet of office space in University City to house 200 additional employees. It also said San Diego is one of six “tech hubs” across the country earmarked for expansion.

Office vacancy rates are up across San Diego County, but tech companies moving to the region are seen as a bright spot. Real estate tracker CoStar noted in its latest office market report that the office vacancy rate is now around 10.7 percent — its highest in three years.

However, CoStar pointed out the recent moves in the market that could appeal to tech firms: Plans for the transformation of Horton Plaza into a tech hub, the northern extension of the San Diego Trolley to job centers, and the Carmel Valley mixed-use One Paseo development (with plenty of office space) is nearing completion.

Still, San Diegans bracing for a Silicon Valley invasion can probably relax. A handful of businesses getting office space in the region doesn’t represent anywhere close to a wholesale move of Silicon Valley to areas south, and while Bay Area people might be more likely to move now, there isn’t much precedent to suggest they will come here.

Nathan Moeder, a principal with real estate analysts London Moeder Advisors, said many tech workers have been able to work remotely for years and never moved en masse to San Diego before.

Moeder said it was unlikely a vast majority of tech workers would leave the Bay Area because many of their businesses will want to return to the office if there is a vaccine. He cited Google’s efforts to create a substantial amount of perks at its offices to encourage employees to work together and be innovative, making it unlikely the shift to teleworking will be as big as some might expect.

One Bay Area company adjusting to working remotely is Sundae, a business that buys distressed homes quickly from homeowners. Josh Stech, CEO of the company, said his more than 60 employees are all working remotely — including some in San Diego — and each was given a stipend to improve their work area at home. The company is also paying for phone and Internet.

While it will be a while before the true impact of how many people left San Francisco is known, he said the anecdotal stories of people leaving are powerful. Stech said of his circle of roughly 30 close friends, 10 have left the city in recent months. He said the preschool his son attended in San Francisco went from 14 students to eight.

Like Moeder, he isn’t seeing a mass exodus of tech workers to Texas and Utah, or farther south to San Diego, but more of a push to get a house in surrounding areas of San Francisco.

“You are seeing less linkage to the city, pushing people 30 to 40 minutes outside of it,” Stech said. “I think their logic is I get more room . . . But, when things go back to normal I am still within driving distance.”

Fender and Guillen said they are thrilled with their decision. They said the extra space gives them the opportunity to start a family and it allows them to be there for their parents, who are getting older and would have been unable to afford moving to the Bay Area near them.

After years of being away, Fender said she was excited that she could keep her job and still be able to drive down to Tijuana to help her parents with errands, and can almost see where her parents live.

“We can kind of see the hill where my parents live,” she said of where their home is in Chula Vista. “I’m like, ‘Oh my God, I can see Cerro Colorado.’”