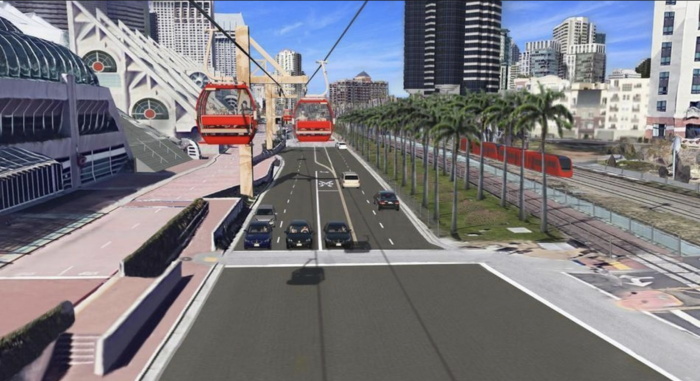 County Supervisor Ron Roberts just commissioned a report to help decrease traffic congestion on Harbor Drive as the airport proposed a $3 billion redevelopment plan.  The proposed solution is an airport skyway which looks like ski lift or gondola that can carry 8 to 12 passengers.  This skyway will have key stops between the airport,  downtown, convention center, and other major transportation hubs.

An unconventional mode of urban transit is being floated in front of city leaders and regional agencies as a solution to connect airport travelers to San Diego’s downtown area.

More recognizable as a ski lift or gondola, an aerial cableway system is the best answer to the airport’s in-and-out transportation woes, according to County Supervisor Ron Roberts. His office commissioned a report to study the feasibility of using a so-called “skyway” to get people from the Convention Center to San Diego International Airport, and vice versa, with a handful of stops at various points along Harbor Drive

The report cost $75,000 and was prepared by consulting firm WSP Global with help from the San Diego Association of Governments. It was recently shared with the mayor’s office, the Port of San Diego, the San Diego Regional Airport Authority and other agencies in an effort to prompt interest — and action.

It comes as the airport wraps up an environmental review for a proposed $3 billion redevelopment, which critics say will increase traffic congestion on Harbor Drive.

“What we wanted to do is put something on the table,” Roberts said. “We really wanted to force (the airport) to engage. If not this, then at least give us a solution.”

The downtown-to-airport skyway is not only feasible but the most practical option, he said, citing the report’s findings.

The report found that a skyway system that follows Harbor Drive from Fifth Avenue at the Convention Center to the airport would cost from $230 million to $300 million to build, and an additional $11 million to $12 million to operate annually. It could transport up to 2,400 passengers per hour, per direction in enclosed eight- to 12-passenger cabins. The skyway would also allow for direct connections to bus, train and trolley stations, as well as offer easy walking access to hotels, Seaport Village and other downtown attractions.

The roughly 25-minute route would start with a passenger station at Harbor and Fifth Avenue, then travel northwest along Harbor Drive with stops at First Avenue and near Kettner Boulevard. The system would then turn north at Kettner and continue toward Sante Fe Depot with a station at the intersection of Kettner and Broadway. Then, the skyway would head west along Broadway and stop again at Broadway at Harbor. Finally, it would travel along Harbor Drive to the airport, using several turning towers to navigate directional changes, and culminate with stops at Terminal 1 and Terminal 2.

Using travel data from SANDAG, the study projected the skyway system’s ridership at between 1.1 million trips and 1.6 million trips per year, or 3,600 to 4,900 trips per day.

It’s a lofty vision providing agencies with food for thought, even if it remains a pie-in-the-sky idea for the time being.

In the U.S., there are only a few examples of metros employing aerial cableway technology as a mode of urban transportation. The first mass transit application, completed in 1976, was the Roosevelt Island Tramway in New York. It uses a simple, point-to-point system to connect the island to Manhattan. The tramway travels 0.6 miles and transports 2.8 million people per year.

The tram was replaced in 2010 by cable transport-maker Leitner-Poma, which currently operates and maintains the system. The firm, which has met with Roberts and other regional officials, says more than a dozen skyway projects, similar in scope to the one studied for San Diego, are being considered by municipalities around the nation.

The cableway technology, said Leitner-Poma Operations Manager Mike McGuckin, is starting to appeal to U.S. urban planners because it elevates commuters off the street, carrying thousands of people per hour through densely populated or topographically challenging areas. It’s also energy efficient, he said.

Still, an urban cableway system with multiple passenger stations, as proposed in the San Diego study, has never been implemented in the U.S. The complex cableways are, however, fairly common abroad with large systems in South America, Asia and Europe. For instance, La Paz, Bolivia’s “Mi Teleferico” nine-line system runs 19 miles and conveys 23.6 million people every year, the study notes.

In San Diego, an airport skyway’s two biggest hurdles — money and political will, according to Roberts — are of the derailing variety. For starters, a local agency would need to take the lead and fund additional analysis. A comparable analysis study alone would cost around $850,000 to conduct.

As it stands, local stakeholders said that they are keeping an open mind when it comes to easing traffic congestion around the airport.

“It is critical that we explore all options to enhance mobility in that area and expand access to our waterfront,” said Christina Di Leva Chadwick, spokesperson for Mayor Kevin Faulconer. “The airport skyway is one of several alternatives city staff and regional planners will be evaluating as we look to invest in public infrastructure that moves the most people at the highest and best use of taxpayer dollars.”

Airport officials, who had hoped to break ground on their redevelopment project in 2020, echoed a similar sentiment.

“We think it’s premature to identify the technology now — whether it’s a people mover or some other automated system,” said Denny Probst, vice president of development at San Diego International Airport. “Whatever the region determines is the best solution, we are committed to talking to the FAA about how we can share in that.”

The Port of San Diego, which oversees waterfront property along San Diego Bay, is also amenable but noncommittal.

“The port is eager to explore these and other ideas for improving mobility around the waterfront of San Diego Bay through regional partnership,” said Jason Giffen, assistant vice president for the agency.

In 2015, Roberts’ office commissioned a similar study that looked at the feasibility of a $75 million skyway from San Diego Bay to Balboa Park. That project has taken a back seat to the airport line as Roberts feels funding sources will be easier to obtain for the latter effort.