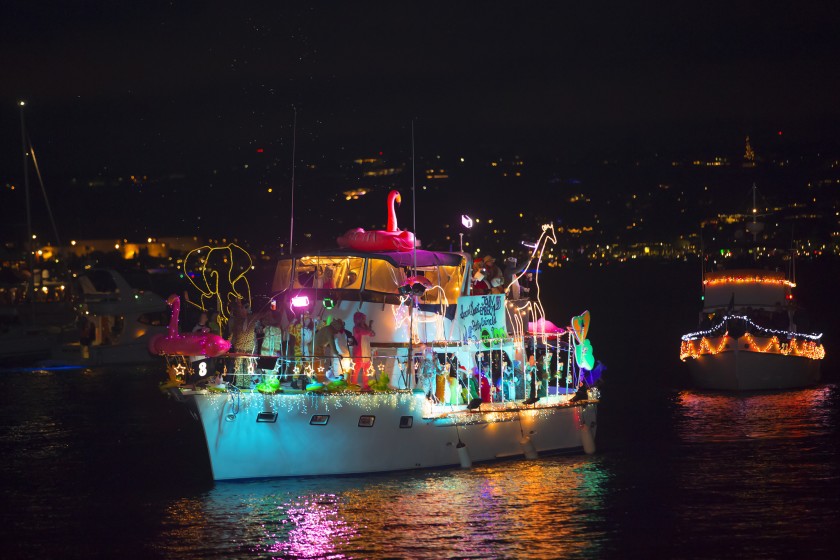 20 things to do this weekend: Parade of Lights, ‘The Colors of Christmas’ concert, ‘La Pastorela’

More than 80 lavishly decorated sailboats, yachts and dinghies will light up San Diego Bay on Sunday during the 48th annual Parade of Lights. The theme this year is “Comic-Con on the Bay,” with vessels putting on displays inspired by their favorite comic books. The flotilla sails at 5 p.m. from the south end of Shelter Island past Harbor Island, the Embarcadero, Seaport Village and The Pier at Cesar Chavez Park. The boats then cross the bay to Coronado and finish at the Coronado Ferry Landing around 7 p.m. CAROLINA GUSMAN

Holiday Bubbly & Brunch at the Beach

Toast the holidays — and how lucky we are to enjoy oceanside festivities in December — when JRDN executive chef David Warner welcomes France’s glam Champagne house Billecart-Salmon for a four-course, four-glass holiday edition of the restaurant’s popular Bubbly & Brunch at the Beach. On JRDN’s sand-swept patio, brunchers will have a view of the Pacific Beach pier’s Christmas tree decorations. Paired with the accessible elegance of the Billecart and Warner’s always-tasty cooking, it sounds like the epitome of eat, drink and be merry. MICHELE PARENTE

Furry creatures and their handlers will jingle all the way through the Gaslamp Quarter on Sunday at the 12th annual Gaslamp Holiday Pet Parade. Costume contest judging takes place from noon to 1:30 p.m., and the parade steps off promptly at 2 p.m. from under the archway at Fifth Avenue. A Holiday Pet Market will be open from noon to 5 p.m. featuring vendors, live music and festive activities. Entry in the pet parade is $15 per pet in advance online, or $20 on the day of the event. Day-of registration and check-in begins at 11:30 a.m. After the parade, winners of the costume categories will be announced at the Pet Parade stage. CAROLINA GUSMAN

Holiday in the Village

4 to 9 p.m. today; 10 a.m. to 9 p.m. Saturday. In the area of La Mesa Boulevard and Spring Street in downtown La Mesa. lamesavillageassociation.org

It’s time for Holiday in the Village with the La Mesa Village Association’s annual event downtown. For two days, the whole family is encouraged to bundle up and head out for live entertainment with holiday music, dance performances, food, activities for kids, shopping, and more. LISA DEADERICK

Gary Heffern is not the only San Diego punk-rock pioneer to have performed at the Casbah multiple times over the past 30 years. But the former lead singer of The Penetrators is the only one who travels here from Rovaniemi, Finland, where he has lived for years. Alas, Heffern may not repeat that trip much longer. The singer, songwriter, poet and author announced his retirement from performing shortly prior to his two January Casbah performances with The Penetrators and as a headliner on his own. He will be honored Sunday at the Casbah with a screening of “Gary Heffern’s Last Waltz,” Grossmont College professor Raul Sandelin’s film that documents Heffern’s January farewell Casbah performance. It’s the second film documentary to be made about Heffern. After the film, Heffern will be further honored by an all-star San Diego band, aptly named Gary’s Kids. It should be an afternoon of both celebration and misty-eyed reflection for performers and fans alike. GEORGE VARGA

“A Christmas Carol: A Radio Play”

You don’t have to turn into Scrooge to tune into him: Once again, Oceanside Theatre Company dials in its broadcast-style adaptation of “A Christmas Carol,” with all the action set in a 1940s radio studio. Ted Leib directs the family-minded production, which comes complete with vintage-commercial breaks. JAMES HEBERT

This annual fundraising concert for Rady Children’s Hospital was co-founded in 1989 by Grammy Award-winning Poway Mayor Steve Vaus. To date, it has raised more than $1 million. This year’s lineup — which features Collin Raye, Bryan White and Jamie O’Neal — will also include Vaus and his daughter, Anna. Craig Campbell will also perform, but only at the Dec. 14 concert. Anna Vaus is a 2018 graduate of Belmont University’s College of Entertainment and Music Business. In 2016, she became the first-ever recipient of the $40,000 “Women Creators” scholarship, which was established in 2015 by country-music star Miranda Lambert. GEORGE VARGA

For the past 27 years, R&B vocal star Peabo Bryson has led the annual “Colors of Christmas” tour, which is designed to bring soulful fervor to even the most staid holiday chestnuts. For this year’s edition, Bryson will be joined by Oleta Adams, Bebe Winans and Jody Watley. GEORGE VARGA

Irving Flores presents “The Latin-Jazz Side of Christmas”

As a child actor in Hollywood, Alex Woodard appeared on “The Love Boat.” As an adult singer-songwriter, he address matters of the heart, soul and psyche. To date, he has made three books and accompanying albums — each with the title “For the Sender” — all featuring stories and songs inspired by real-life letters and correspondence that were shared with Woodard by their senders or recipients. For this year’s annual “For the Sender” concert, Woodard and Molly Jenson will also perform holiday songs with a lineup that includes 2019 Songwriters Hall of Fame inductee Jack Tempchin, Nickel Creek co-founder Sean Watkins, Gregory Page and Nena Anderson. Proceeds from the show go to Team RWB’s Surf Camp for Veterans. GEORGE VARGA

This Celtic-flavored evening will showcase leading Irish dancers Caterina Coyne, Tyler Schwartz and Connor Reider. Music will be performed by members of the 32-year-old Kerry Traditional Orchestra. Jigs and reels should abound, with lots of seasonal flavoring. GEORGE VARGA

San Diego Civic Organist Raúl Prieto Ramírez will pull double-duty when he performs two holiday concerts Sunday at the Spreckels Organ Pavilion in Balboa Park. The first, at 2 p.m., reunites him with Lauren Leigh Mar, who also handled vocal duties in June at Ramírez’s Led Zeppelin tribute concert. The second, at 6 p.m., will feature him with several singers from the San Diego Opera and and members of the Navy Band Southwest Wind Ensemble. GEORGE VARGA

The Blind Boys of Alabama Christmas show, with Nicki Bluhm

Jimmy Carter was a child when he co-founded the Blind Boys of Alabama in 1939. He is still a vital member, 80 years later, of this legendary gospel-music group, which to date has won five Grammy Awards and earned a Grammy Lifetime Achievement Award. Whether singing Christmas favorites and spirituals, or collaborating with such admirers as Ben Harper, Peter Gabriel and Mavis Staples, the Blind Boys bring heart-stirring fervor to every note they sing. GEORGE VARGA

The stage will be overflowing Sunday with singers, musicians and dancers for an evening of holiday favorites by the San Diego Gay Men’s Chorus. Last year’s edition of “Jingle” included some singing nuns who, in all likelihood, were not actual nuns. Will their appearances become an annual habit? GEORGE VARGA

For close to 30 years now, San Diego’s Teatro Máscara Mágica has been the local torch-bearer for a beloved Christmas tradition with its annual revisit to “La Pastorela,” the biblically based play that draws on Spanish and Mexican roots. Now, though, the venerable company has some company, as the upstart TuYo Theatre launches its own version: “Pastorela 2.0.” The two shows premiere one day apart this week: TMM’s “La Pastorela de los Milagros” at the downtown Lyceum Space tonight, TuYo’s new production at San Diego State University’s Don Powell Theatre on Friday. Of course, there’s no reason think this town isn’t big enough for a pair of “Pastorelas.” And as different as the two troupes’ takes on the tradition sound, it turns out they have significant connections. JAMES HEBERT

Expect glorious harmonies to reign at these six concerts. The lineup includes the San Diego Symphony, conducted by Ted Sperling, with Broadway star Betsy Wolfe, the San Diego Master Chorale, the San Diego Children’s Choir, and you (at least, during the audience-sing-along segments). GEORGE VARGA

The three-week celebration kicks off Friday and runs through Jan 5. During the festival, the zoo remains open until 8 p.m. (except on Christmas Eve, when the park will close at 5 p.m.). The park is open on Christmas and New Year’s Day. Festivities start around 4 p.m. and feature lighted displays, including “dancing light” animal sculptures, holiday décor, live animal shows, storytelling, carolers, food specials, live music, a 4-D movie, and Santa Claus and his elves. CAROLINA GUSMAN

When Charles Dickens wrote “A Christmas Carol” in 1843, he didn’t divide the saga into chapters. He gave it “staves” — a musical term for the lines on which a song is plotted. That seems just right for this lyrical “Ghost Story of Christmas” (as the novelist called it), whose tone starts out as a kind of funereal dirge and ends with an ode to joy. And it’s especially fitting for Cygnet Theatre’s elegant, Victorian-accented staging of the piece, which is filled with songs of the season. Those involved with the show, now in its sixth season, follow another kind of music, too: an intricate symphony of entrances and costume changes and choreographic cues and shifting sets. The audience witnesses only the finishing notes of all that activity, but there’s a whole lot of orchestration going on backstage. Here, documented in photos over the course of one performance, is how the people behind “A Christmas Carol” make the whole thing sing. JAMES HEBERT

The movie-based musical “A Christmas Story” is a show with plenty of warmth and good cheer; it’s also a show that has a pack of disgruntled elves dispatching kids down a department store chute that looks like something out of the macabre “Sweeney Todd.” Suffice it to say this is a piece that likes its humor on the cheeky side. As narrated at SDMT by the wonderful Steve Gunderson — taking a break from the Old Globe’s “Grinch” musical after many seasons — “A Christmas Story” tells the tale (familiar from the film) of a Midwestern kid’s quest for the gift of a BB gun. The songs by Oscar and Tony Award winners Benj Pasek and Justin Paul complement the story with humor and tunefulness, and with its big cast and sweet-sounding orchestra, the production is a snappy one all around. JAMES HEBERT

It’s the holidays, and the “Nutcrackers” just keep on coming. For the next three weekends, the dance artists of City Ballet will perform “The Nutcracker” at Spreckels Theatre downtown with John Nettles conducting the City Ballet Orchestra. Choreography is by Elizabeth Wistrich. The Victorian-era story of young Clara’s magical journey into the land of Christmas is danced to the Tchaikovsky score by the City Ballet Orchestra. On-stage Champagne Reception tickets are available for the performance on Dec. 21, a Saturday evening show. On Dec. 11, the company will perform a special sensory-friendly show that “has been adapted for people with a wide variety of sensory or special needs,” including “lowered light and sound cues and relaxed theater rules.” UNION-TRIBUNE